Diets need to be compared sometimes to understand the similarities and the differences, and I am here to do that with South Beach and Nutrisystem diets. I have tried them both, loosely. I ordered some meals from both and read about their benefits and drawbacks to see if I would like to get on one of them seriously or should I stay away. 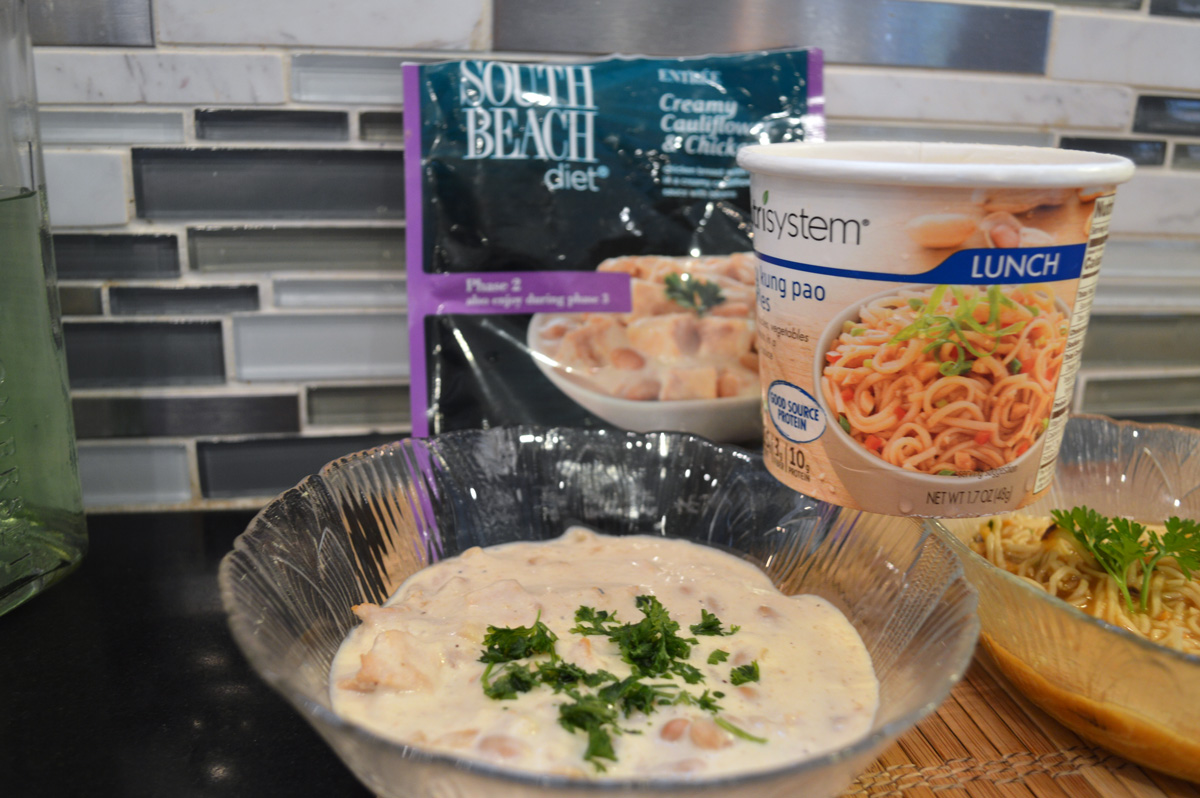 Nutrisystem and South Beach Diet side by side

I ate quite a few meals from both and can tell you that both have some parts that I like and some that I can’t deal with. In short, I love convenience and easiness of them both, but I have no love lost for the taste of their foods. 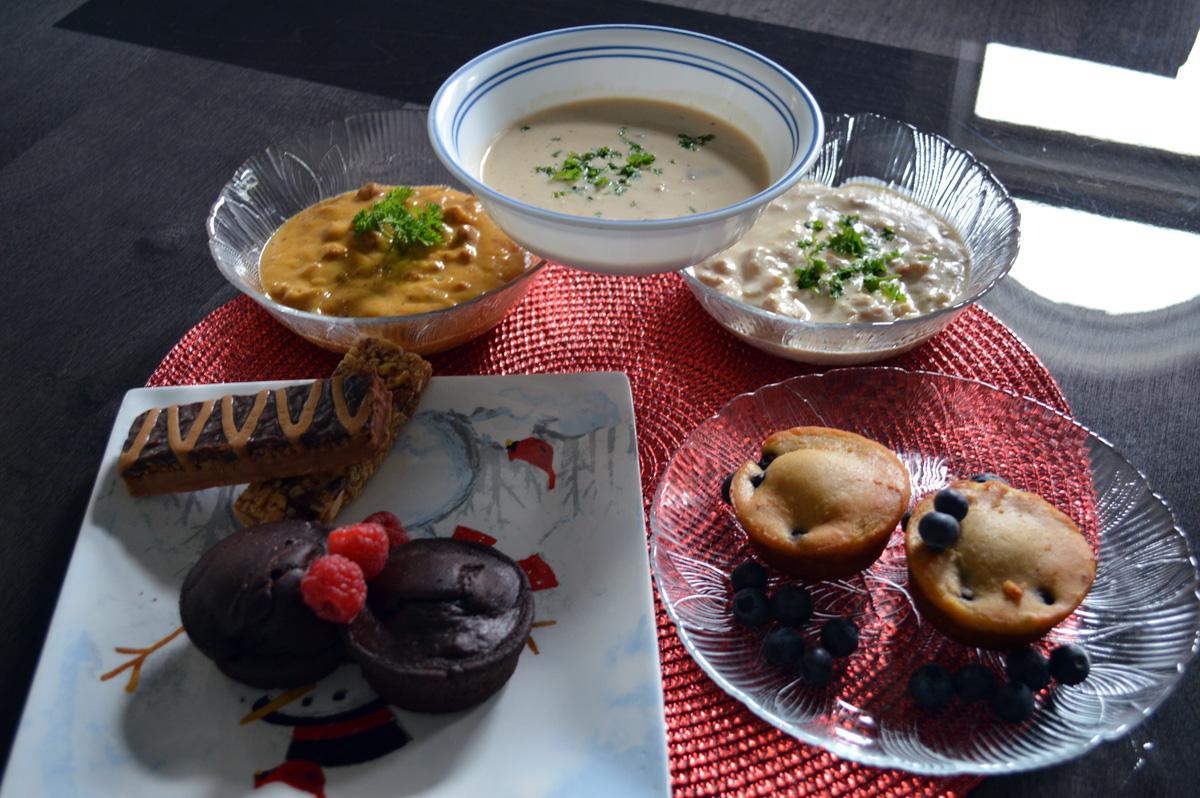 Overall, both meal delivery plans are very similar. They both offer a few plans to choose from, both deliver a month’s supply of meals, and both provide three meals and two snacks per day. 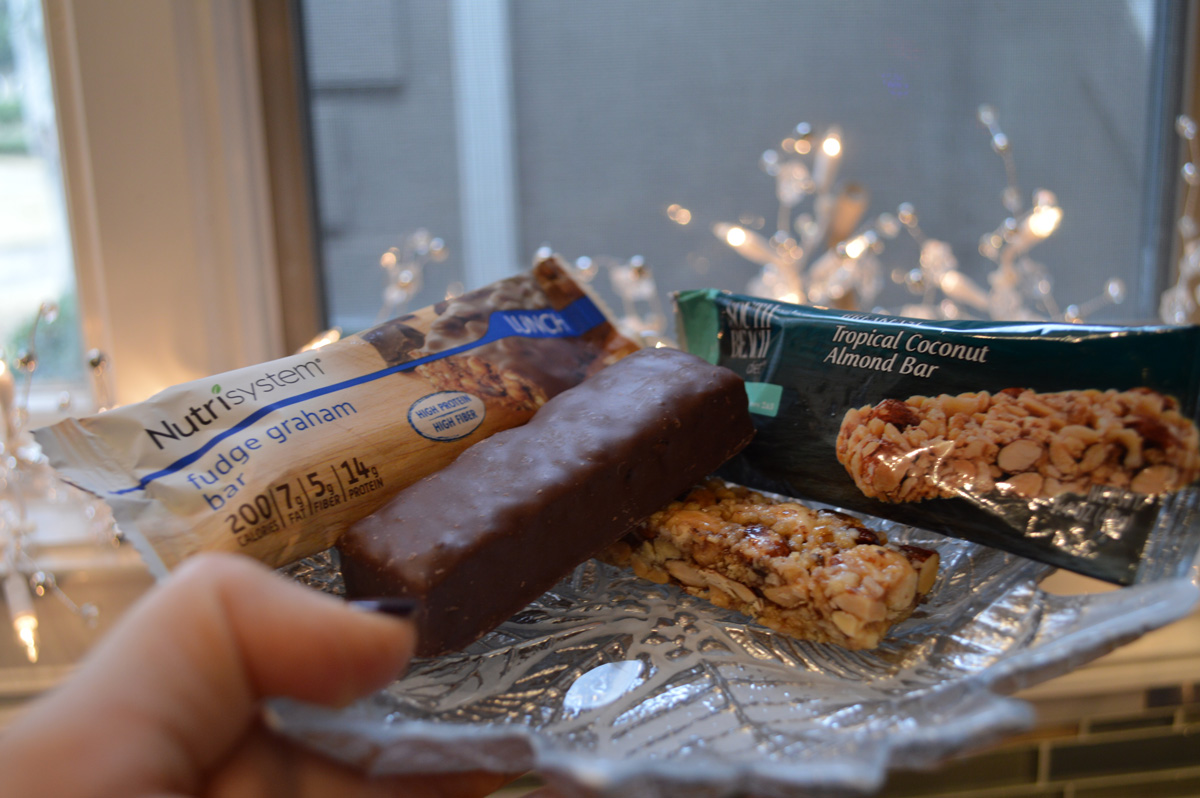 They both also advise dieters to supplement with fresh veggies and protein. They even cost about the same – around $300 per month. 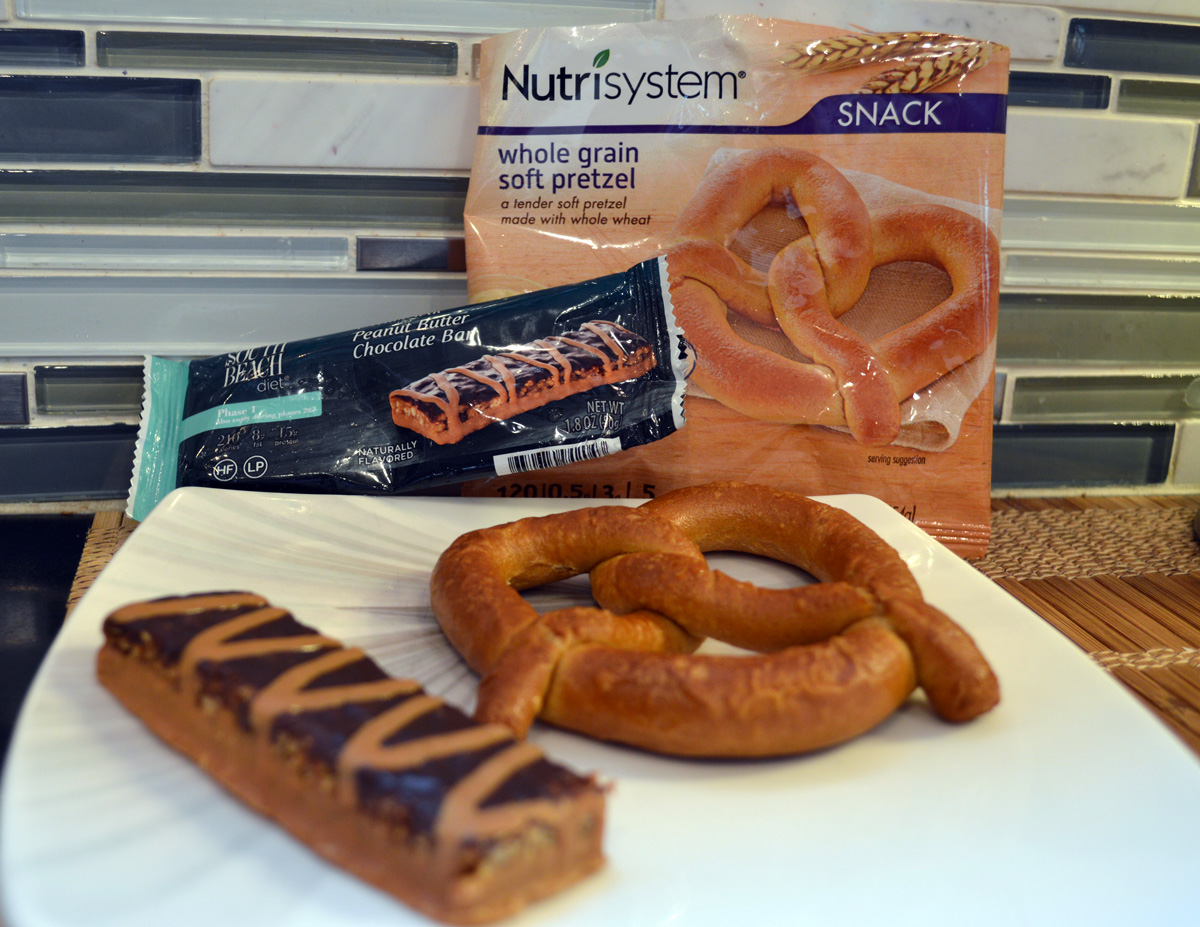 It really seems to be more similarities between them than differences. They both work in similar ways and produce similar results, which is rapid weight loss at first and steady 1-2 pound loss per week later. Nutrisystem is a bit older and has been around for over 4 decades, while South Beach Diet came about in 1990s and was created by a doctor for medicinal purposes. 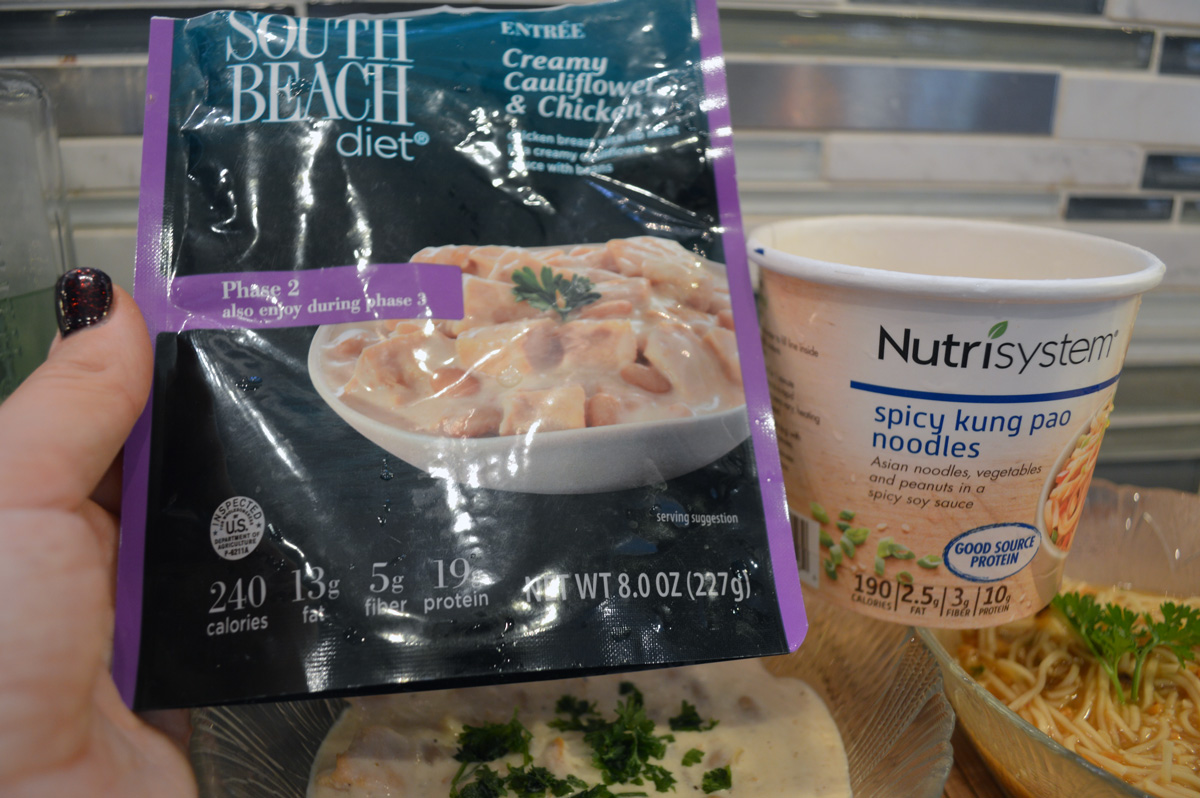 Both diet meal plans have lots of soups

Nutrisystem diet plans focus on low glycemic-carbs and extremely low calories. It aims to cut calories and fat, reduces sugar and increases fiber with protein. This way of eating has been proven scientifically to facilitate weight loss. The diet really works for people who are ready for a change and have enough will power to stay on bland frozen or ready-to-eat food diet for a long period of time. 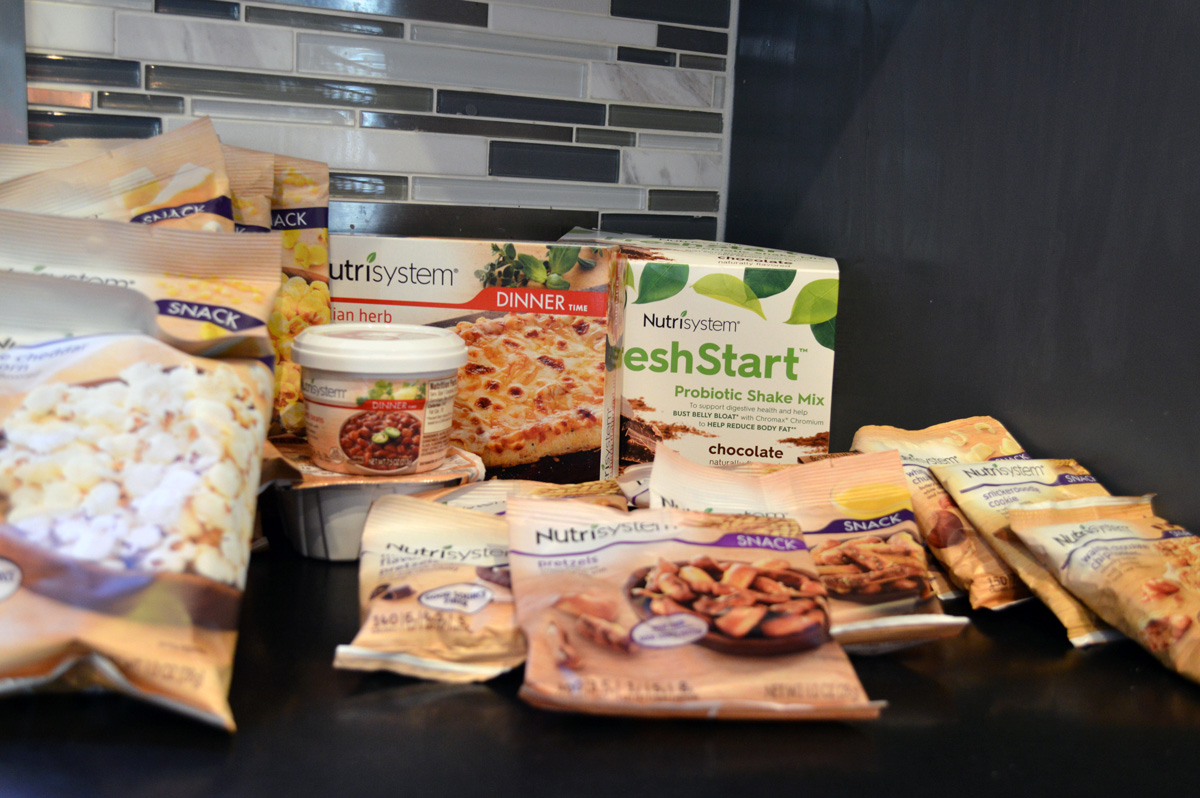 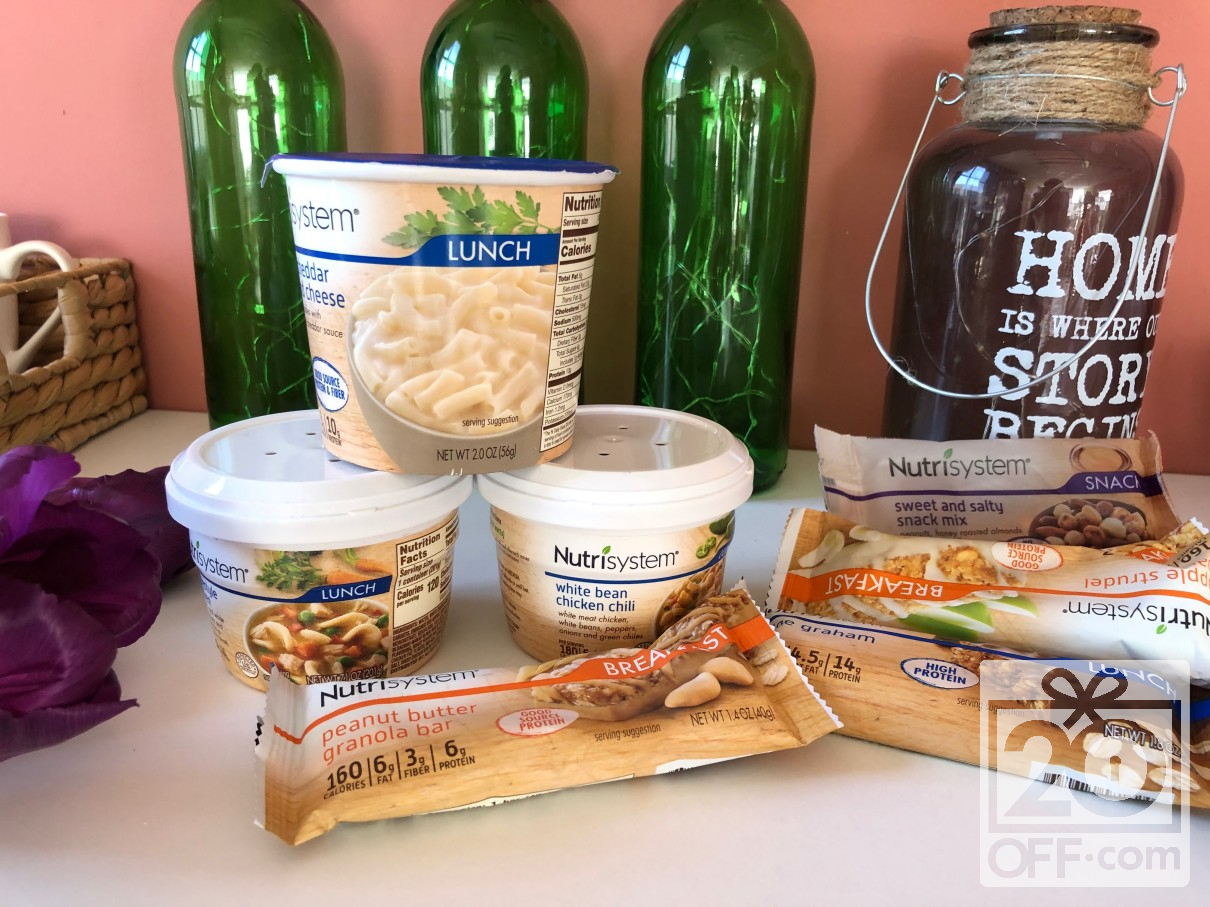 Nutrisystem food might be tough to eat, but is low calorie

South Beach diet works much the same. Actually you really need to study both diets deep to notice a difference. South Beach diet is diabetic friendly and strives to regulate glucose levels by encouraging low-glycemic index carbs, lean proteins, and unsaturated fats. As far as I am concerned the main difference is that South Beach Diet doesn’t restrict healthy fats as much as Nutrisystem. The diet plan also emphasizes veggies and fruit more than Nutrisystem. Other than that it’s all about the taste of foods that differs. 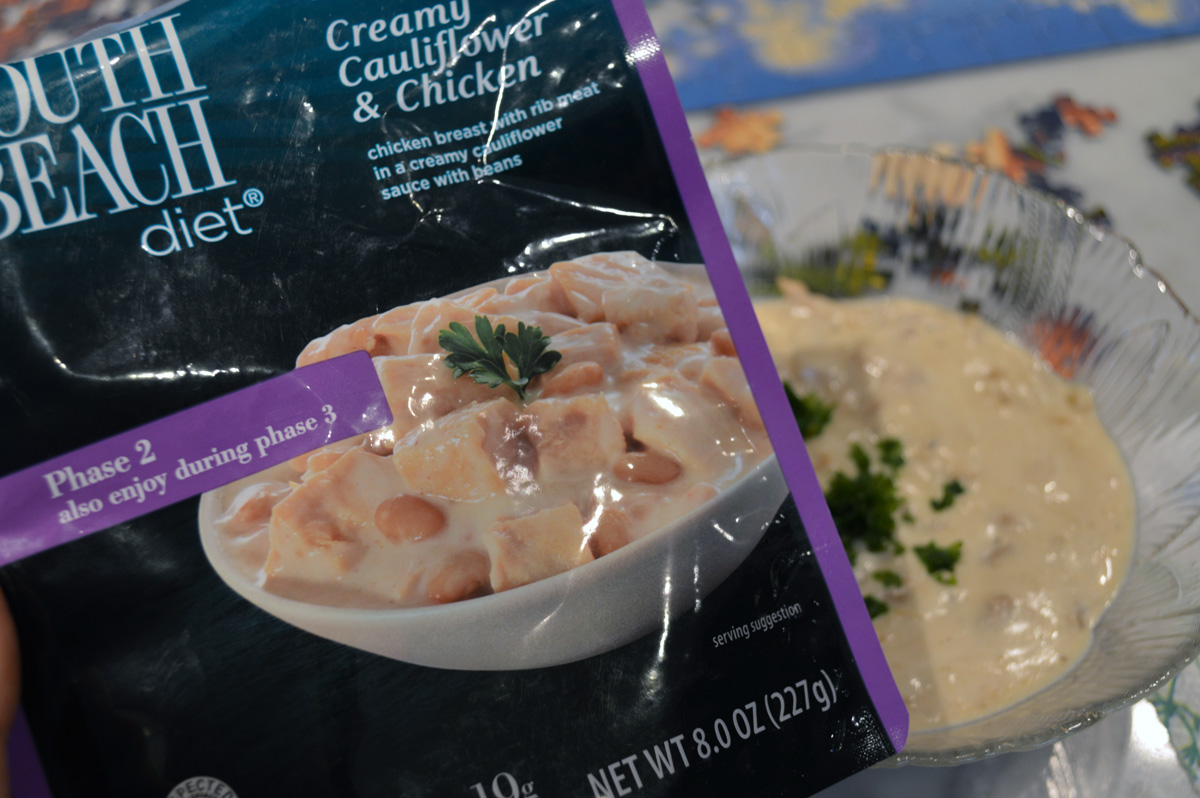 Nutrisystem diet was the first one I tried. I did not know what to expect at all when I first received the box of food for the entire month. For the other two diets I learned not to order the entire month’s worth of food, but instead order just some meals to try before I feel like committing. 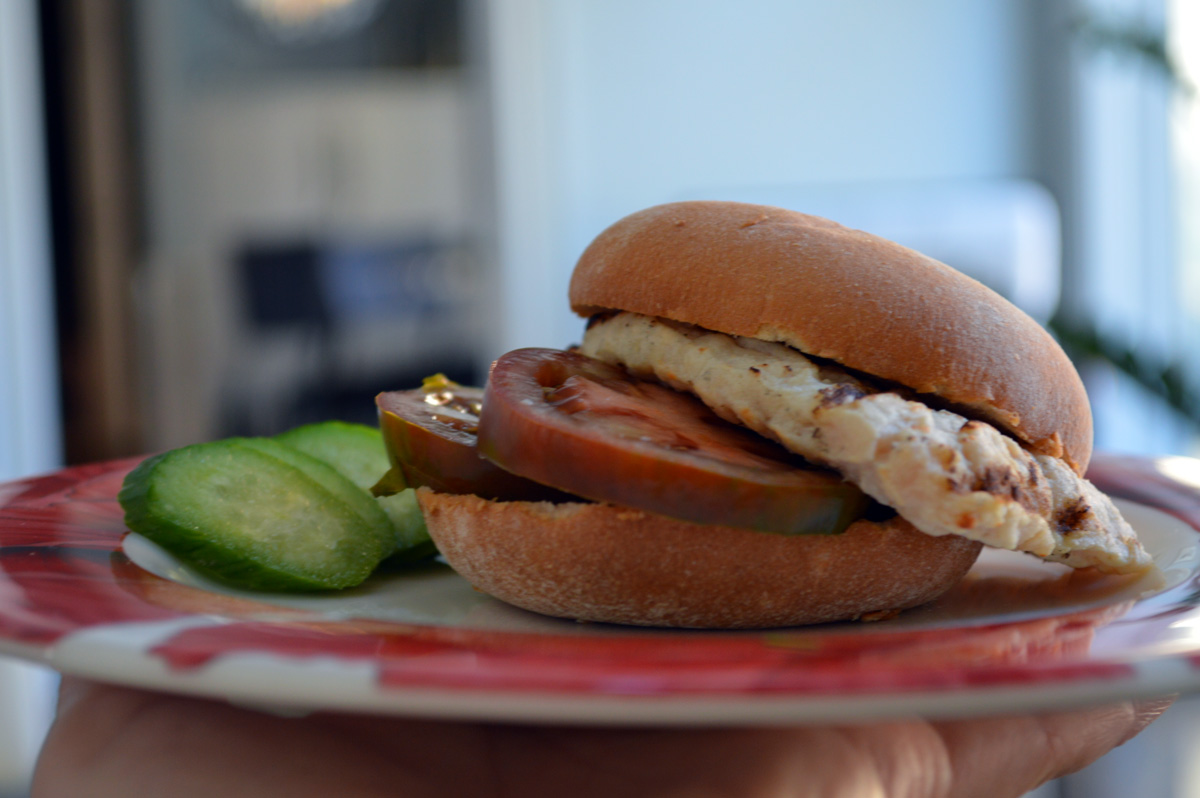 I tried many breakfasts, lunches, dinners, snacks, and protein shakes from Nutrisystem and most of the time didn’t like lunches and dinners. They all tasted bland, too salty, and too much alike. 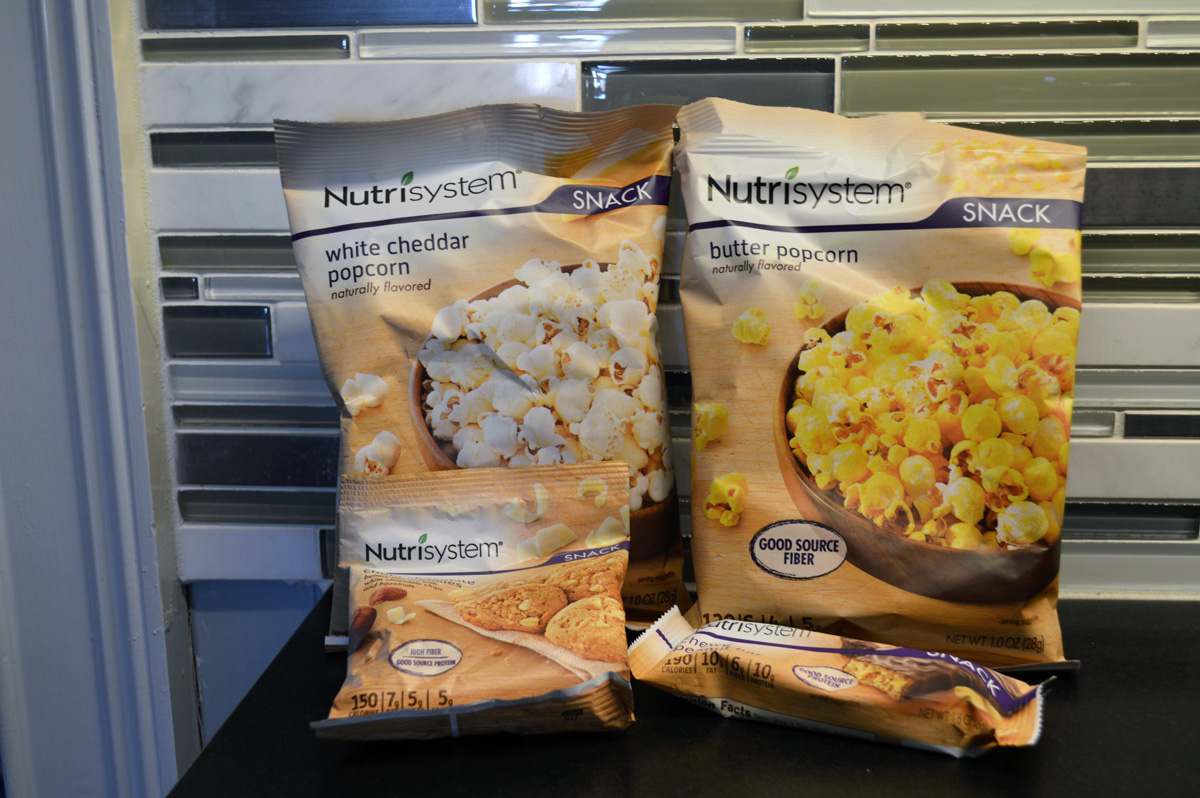 Snacks were too sweet, always. Chicken tasted like cardboard. Only breakfasts and shakes were better, but still nothing I would like to eat day in and day out. 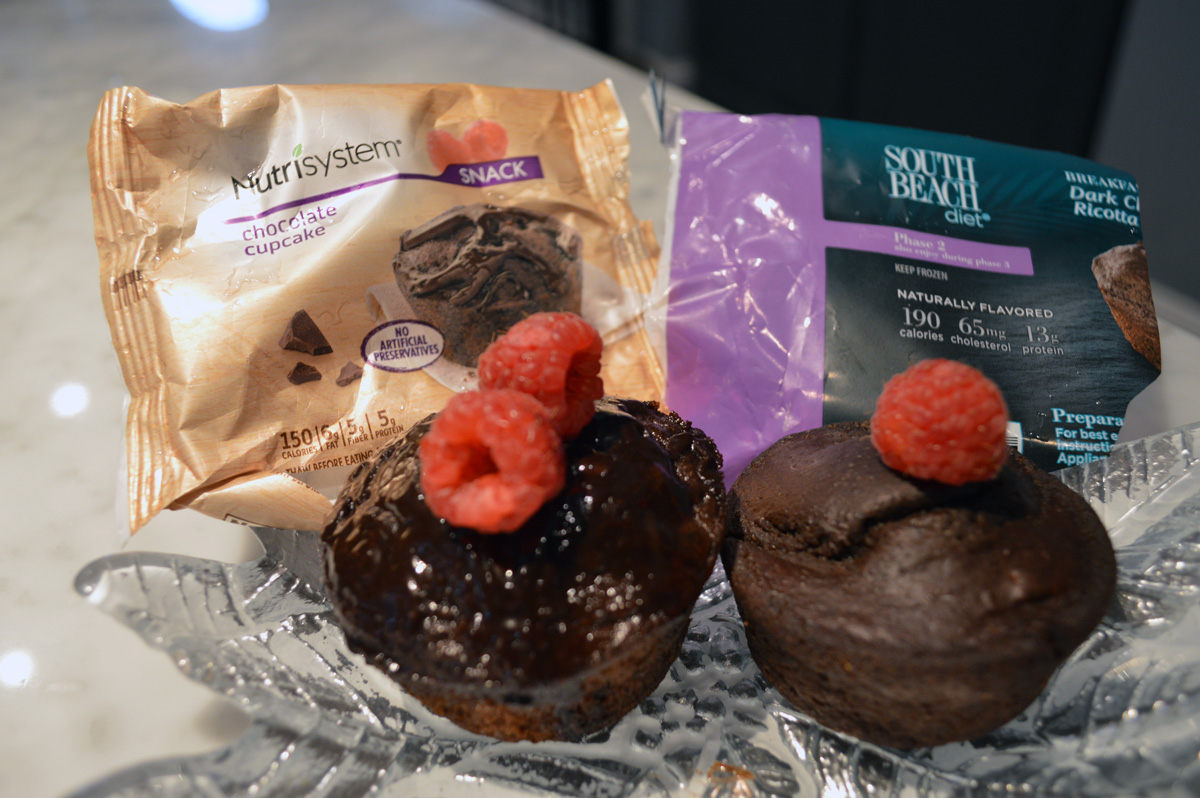 I can see the value in easy meal plan, no thinking, no calorie counting, and no cooking, but I can’t see myself eating this kind of food all the time. I would fall off the diet wagon in two days! 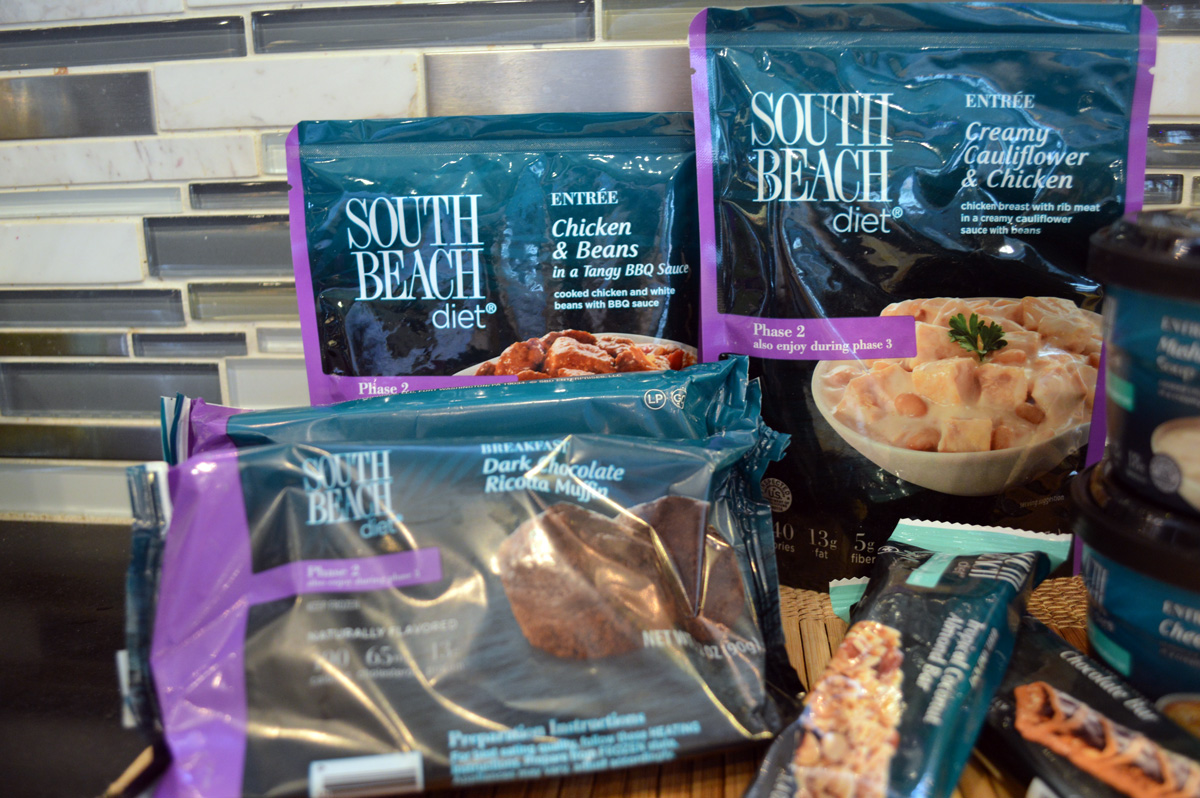 When it came to South Beach Diet, I already had some expectations after Nutrisystem and Medifast. I did not get surprised that foods didn’t taste like what I make at home. I was ready for whatever came my way. I ate a few soups, breakfast muffins, and snack bars from South Beach Diet and found similar tastes – snack bars were way too sweet and muffins way too dry. But I was pleasantly surprised with soups. 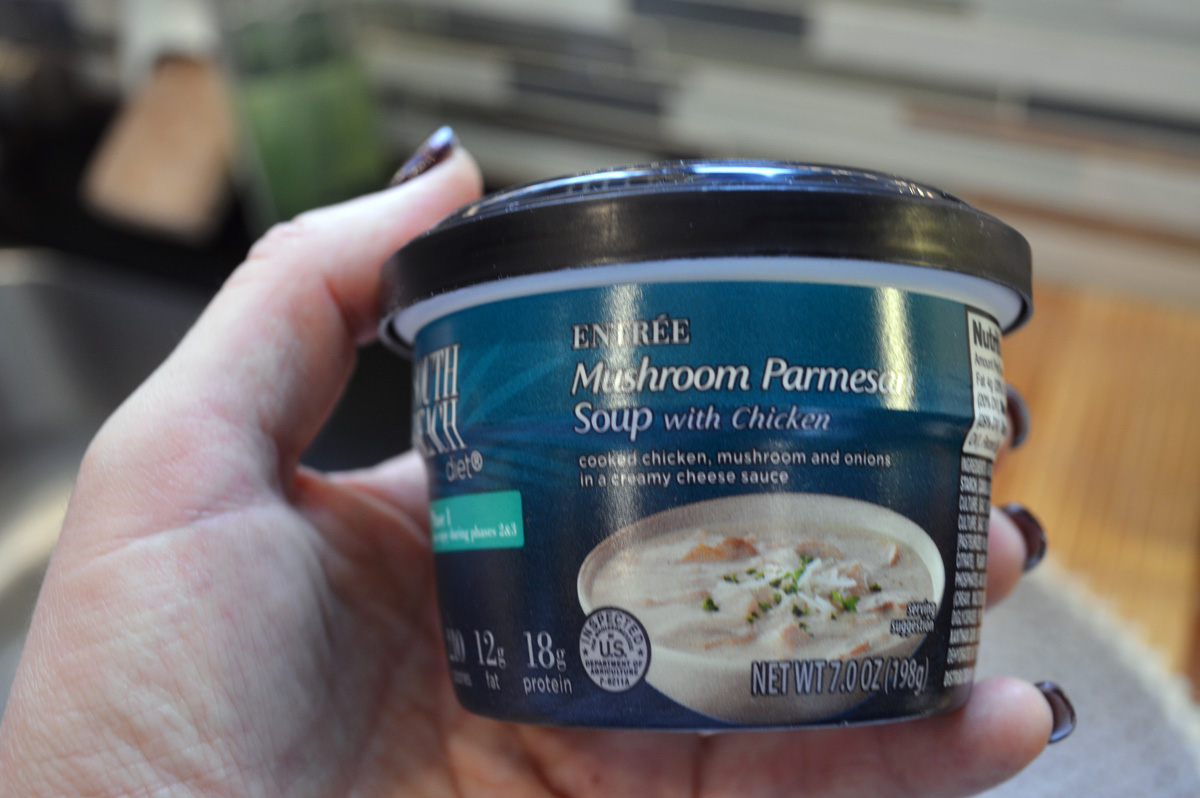 I generally love soups (must be my European heritage talking), and these were not half bad. Yes, I wouldn’t put that much salt in them, but Americans are all about too much salt and too much sugar in everything. I loved Cheeseburger Soup, Mushroom Parmesan Soup, and Creamy Cauliflower Chicken, which technically was not soup, but looked like one. All of those entrees had about 200 calories, were small portions, but kept me full and relatively satisfied. 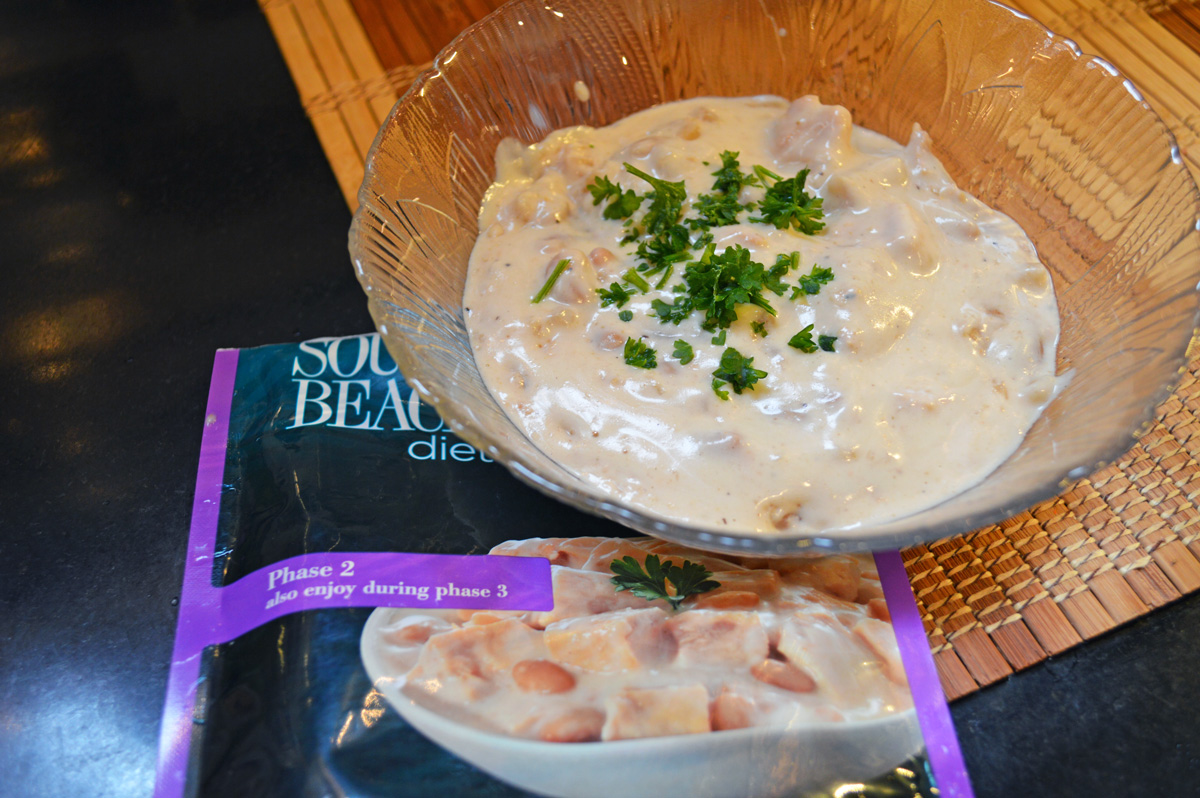 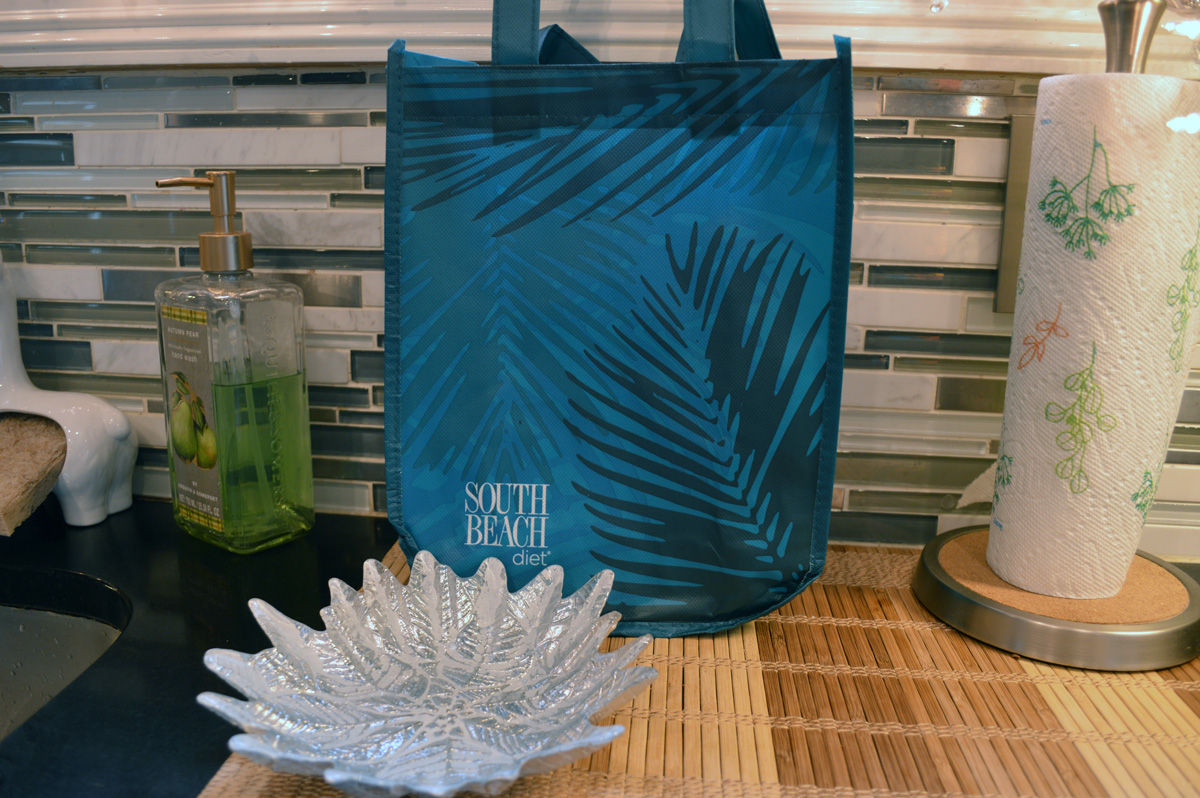 When it comes to taste, South Beach Diet wins by a small margin, at least with some meals. When diets are this alike I see this small win as a reason to celebrate. If I would have to make a choice between Nutrisystem and South Beach Diet, I would go with the latter. 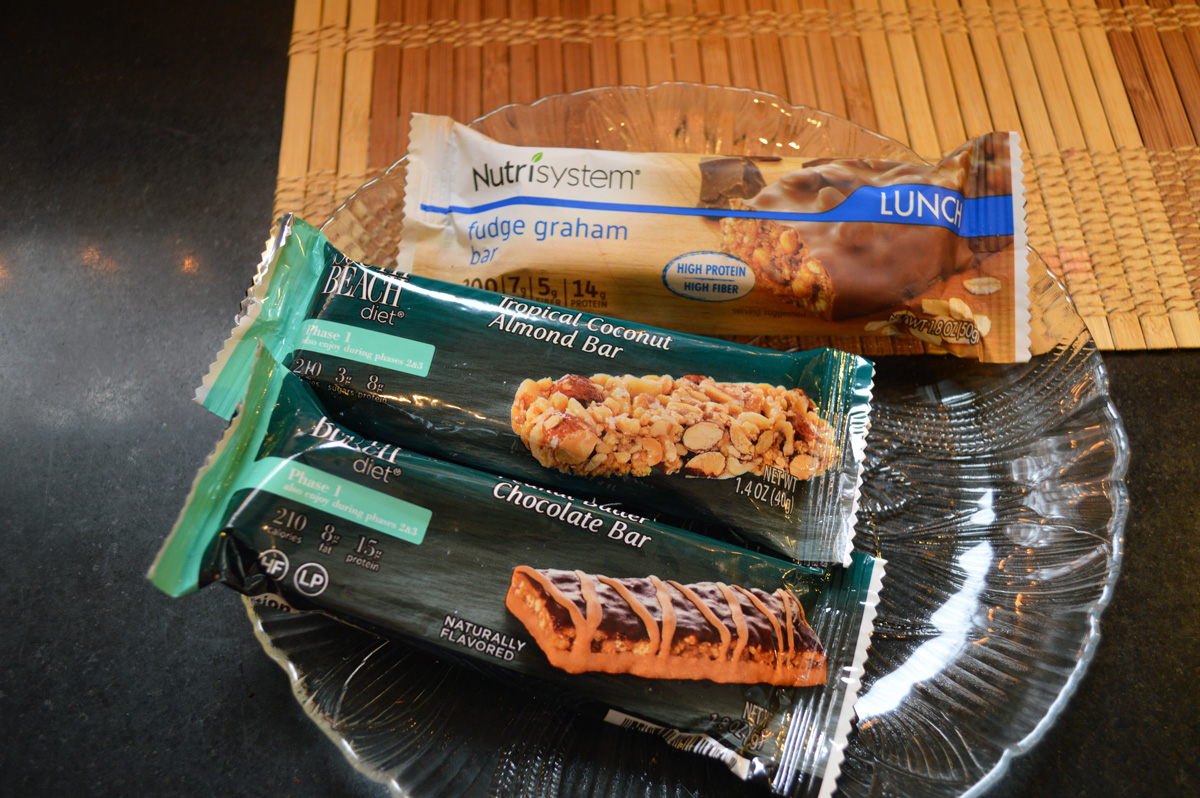 Both diets offer lots of bars

In general, I believe that both diets work and produce similar results. How can you not lose weight when you limit your calories severely, eat small portions, and up your fiber and protein intake? I am not a dietician or a doctor, so a small difference in fat doesn’t mean much to me. Taste does though, and with that I choose South Beach Diet over Nutrisystem.