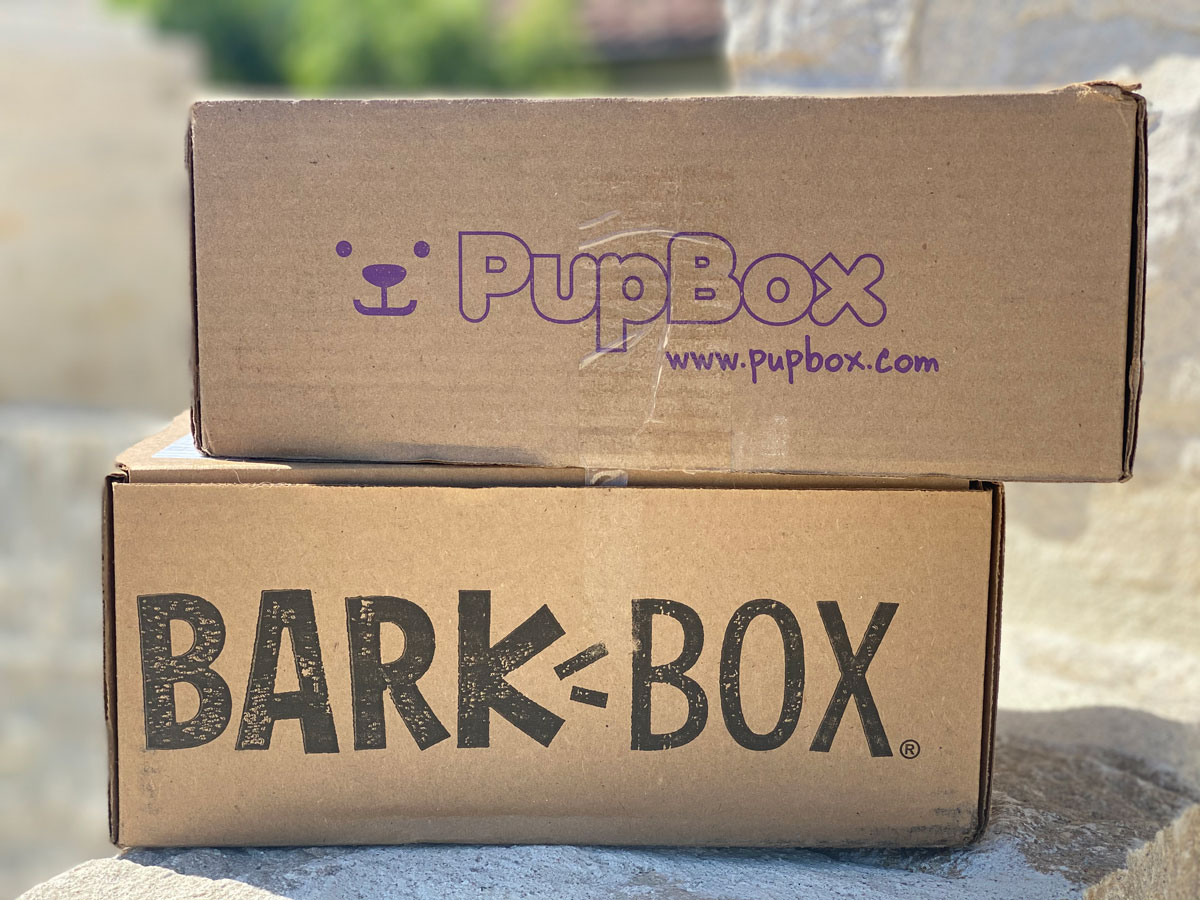 I always say that it can never be too many toys and treats for any dog. They give us their love and in addition to that feeling right back, we also should spoil them a little, or a lot. I know I am, with frequent shopping trips online and in stores. Since shopping in physical stores in California is less pleasurable now with masks, longer lines, and all of that, I resorted to shopping online even more. 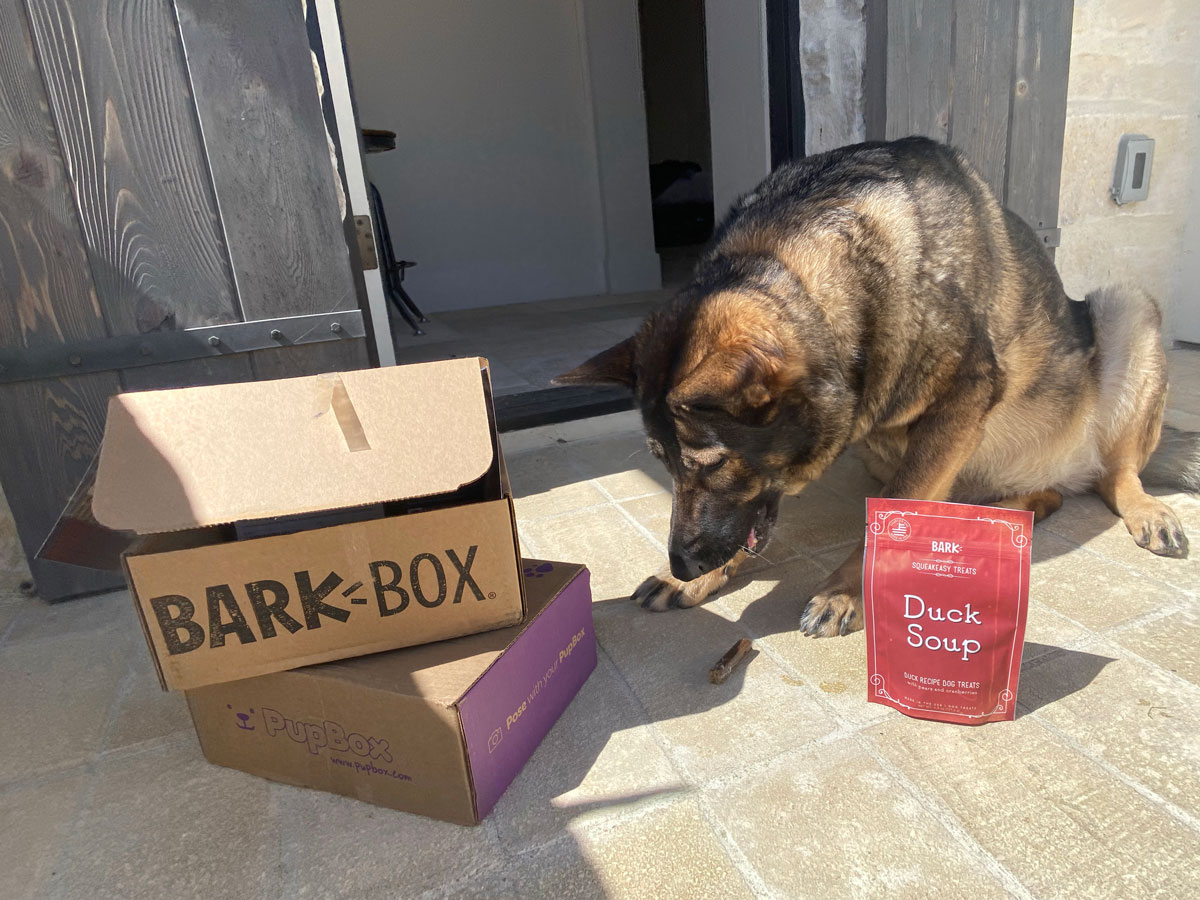 Ordering subscription boxes can’t even be considered shopping really. I just sign up for a box and let pet experts pick some amazing stuff for my girl and ship them to us. I have been enjoying spoiling her this way so much that I ended up testing quite a few monthly subscription boxes recently. Our latest ones were PupBox and BarkBox. The latter one I have tried before, but PupBox was new to us. 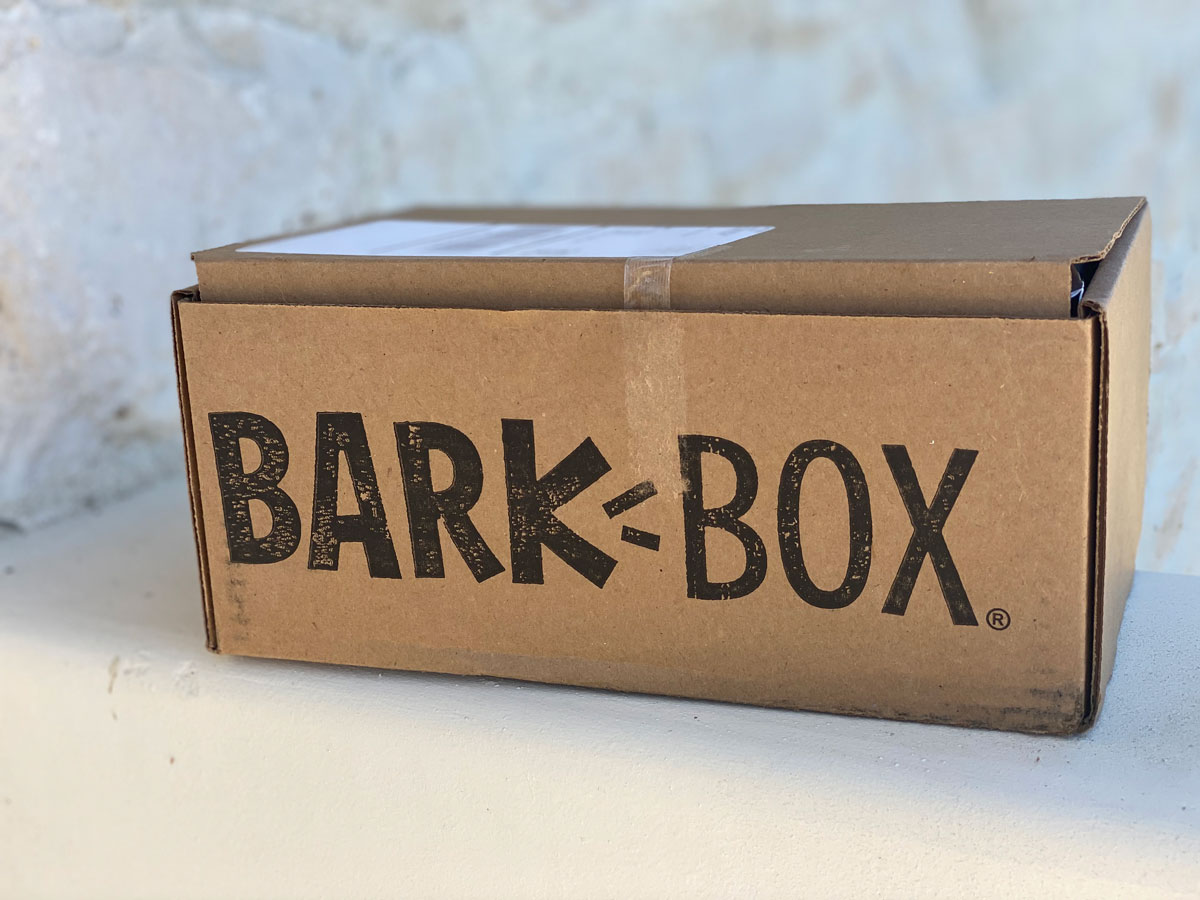 Both boxes are relatively similar – each brings toys, treats, and chews. PupBox also includes some tips for training or some fun games to play with your pet. Both are themed and feature toys and treats made just for them. BarkBox sells some toys in Target, but PupBox’s selection is available only through subscription. 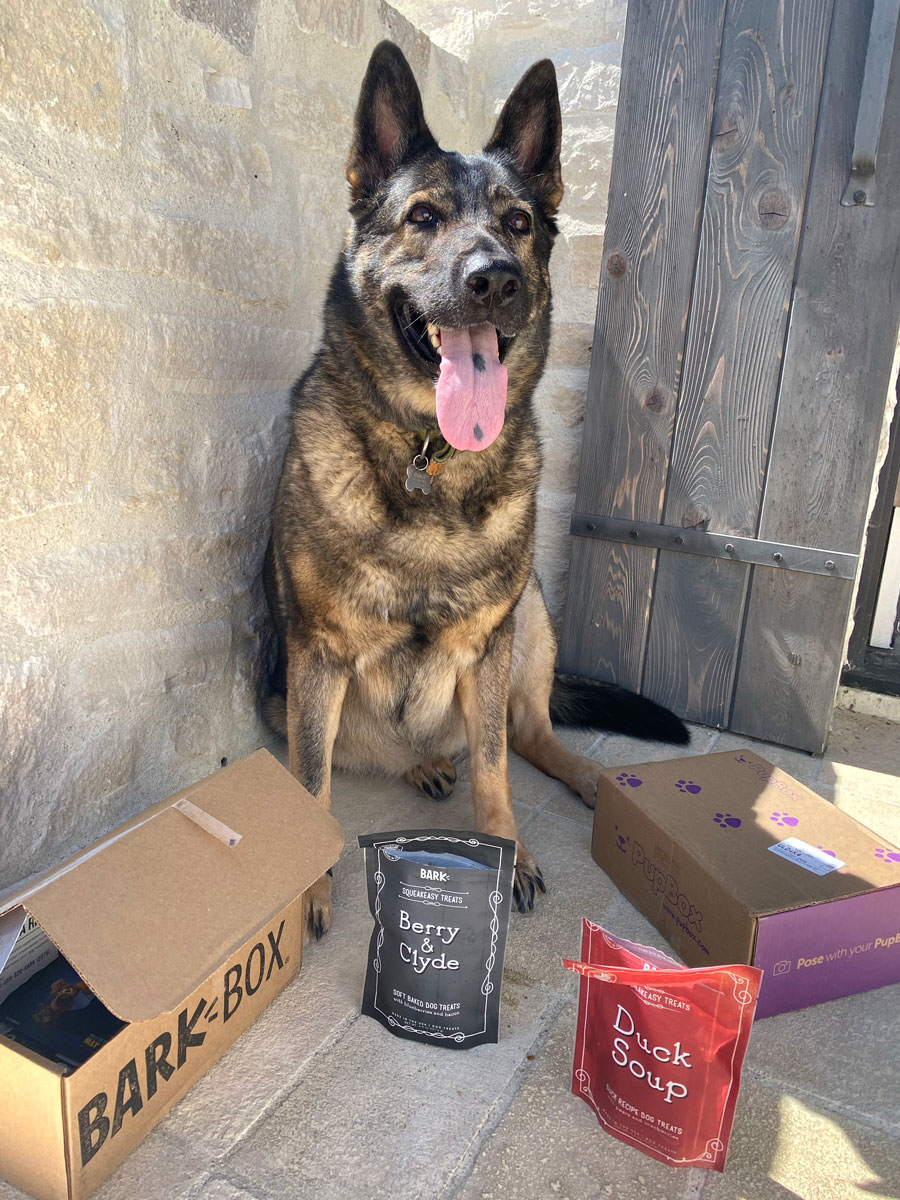 While PupBox targets puppies, you can select adult dog option as well. Even with that I like BarkBox a little bit more. I am used to it and feel that they deliver high quality products every time without fail. 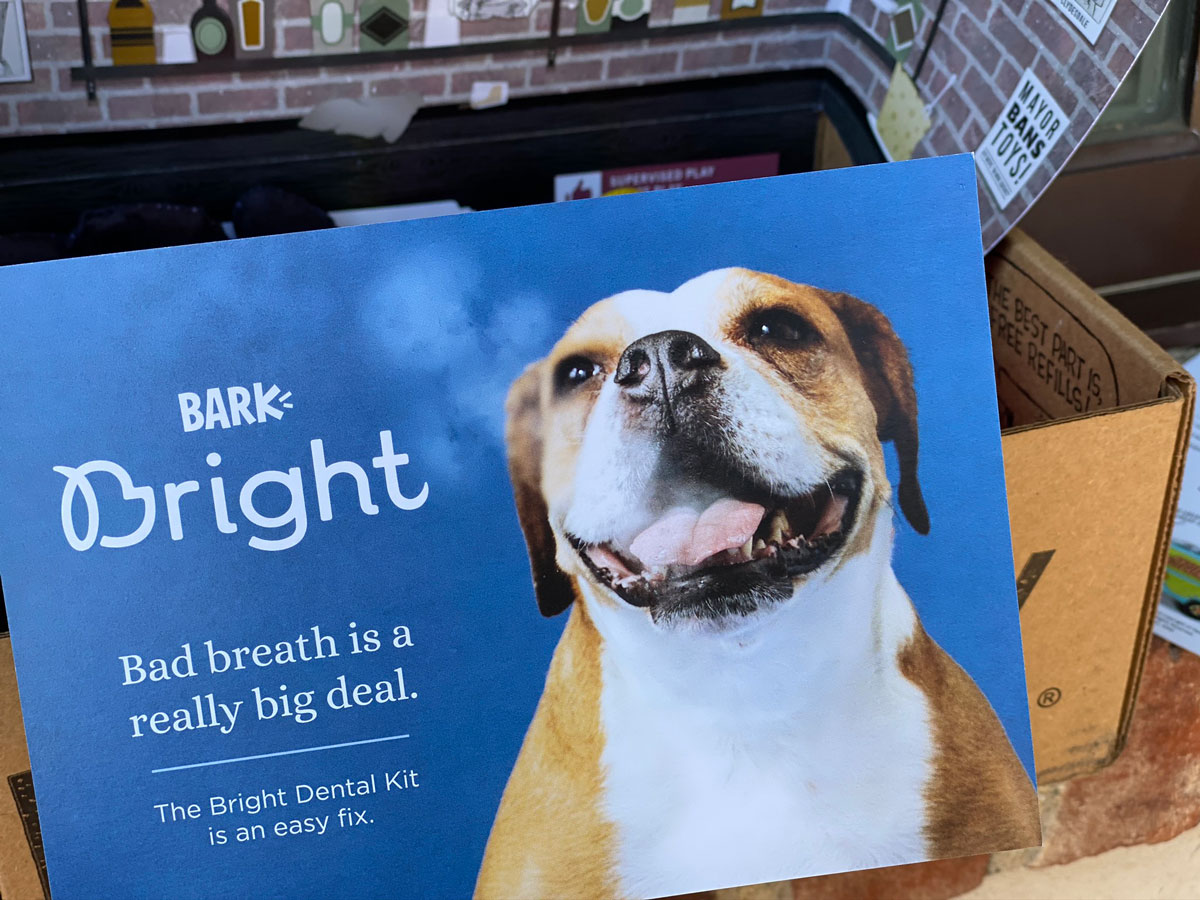 BarkBox is a little bit cheaper and includes 5 items versus more expensive PupBox with the same 5 items and directions for a game or two. BarkBox also has an option to call customer service and ask for fewer plush toys if they get destroyed too fast.

Let’s take a look what came in May PupBox: 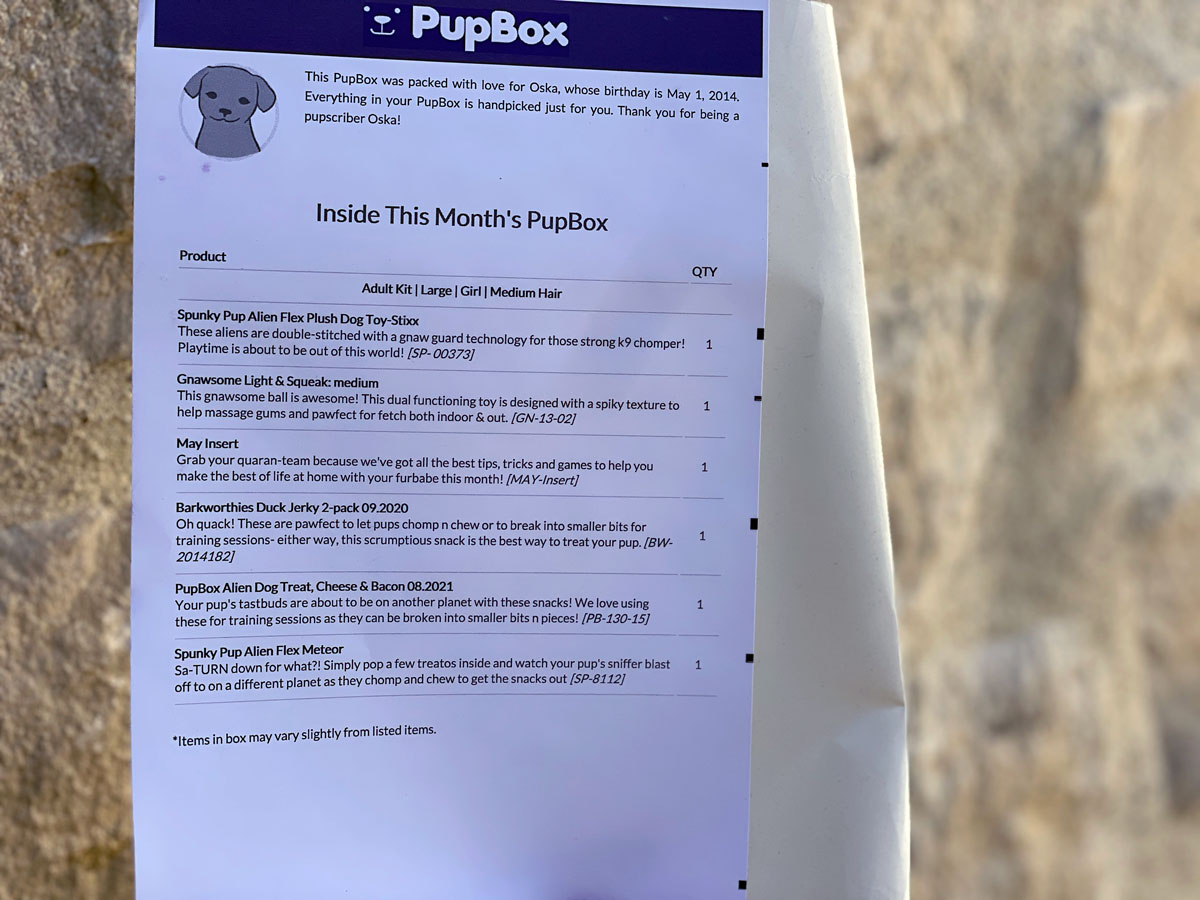 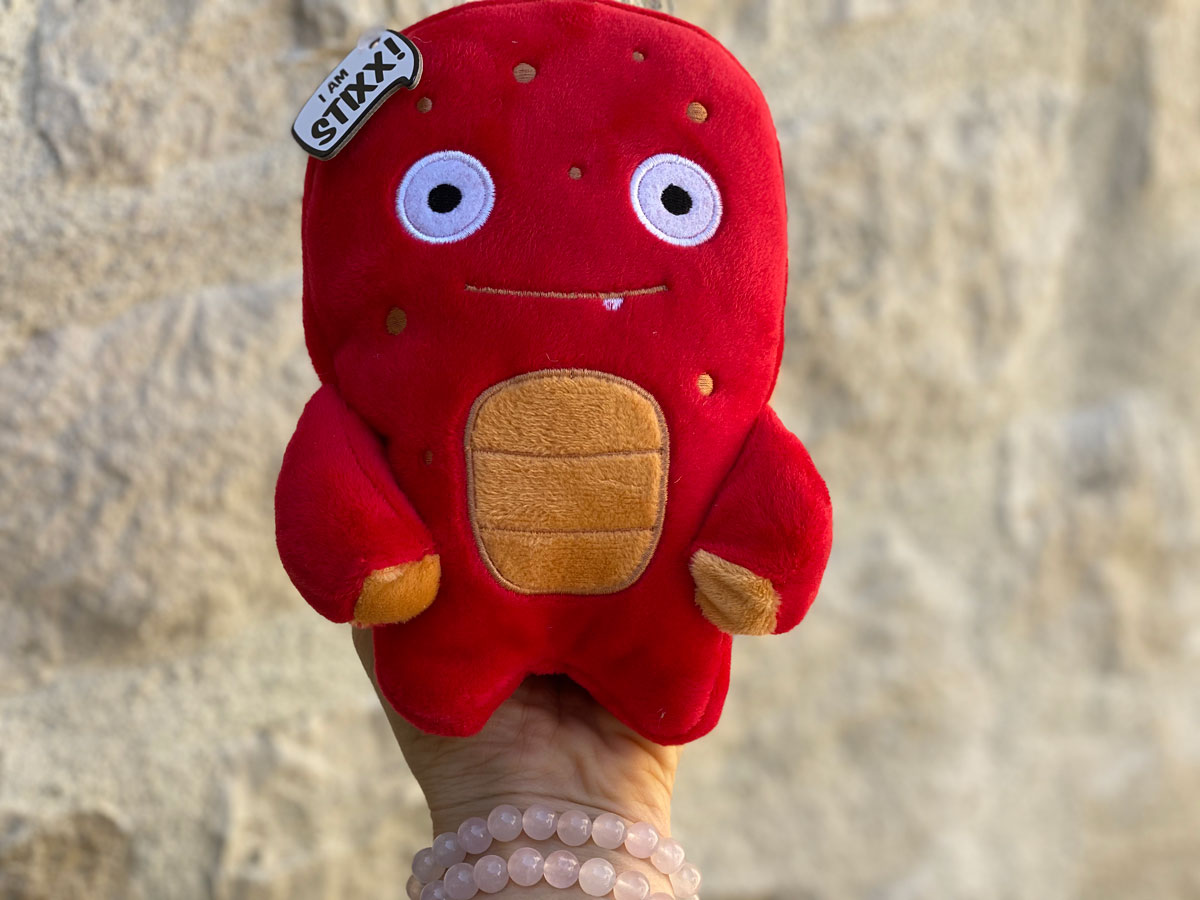 This toy is cuteness overload, but rather small and won’t last for more than an hour if Oska is going to take a liking in it. It’s all red, so most likely it will experience some loving from those white teeth.

Duck jerky couple smells really good and is soft enough to be consumed very fast. This is why I gave just one and saved another for later – quarantine dog weight gain is real too! 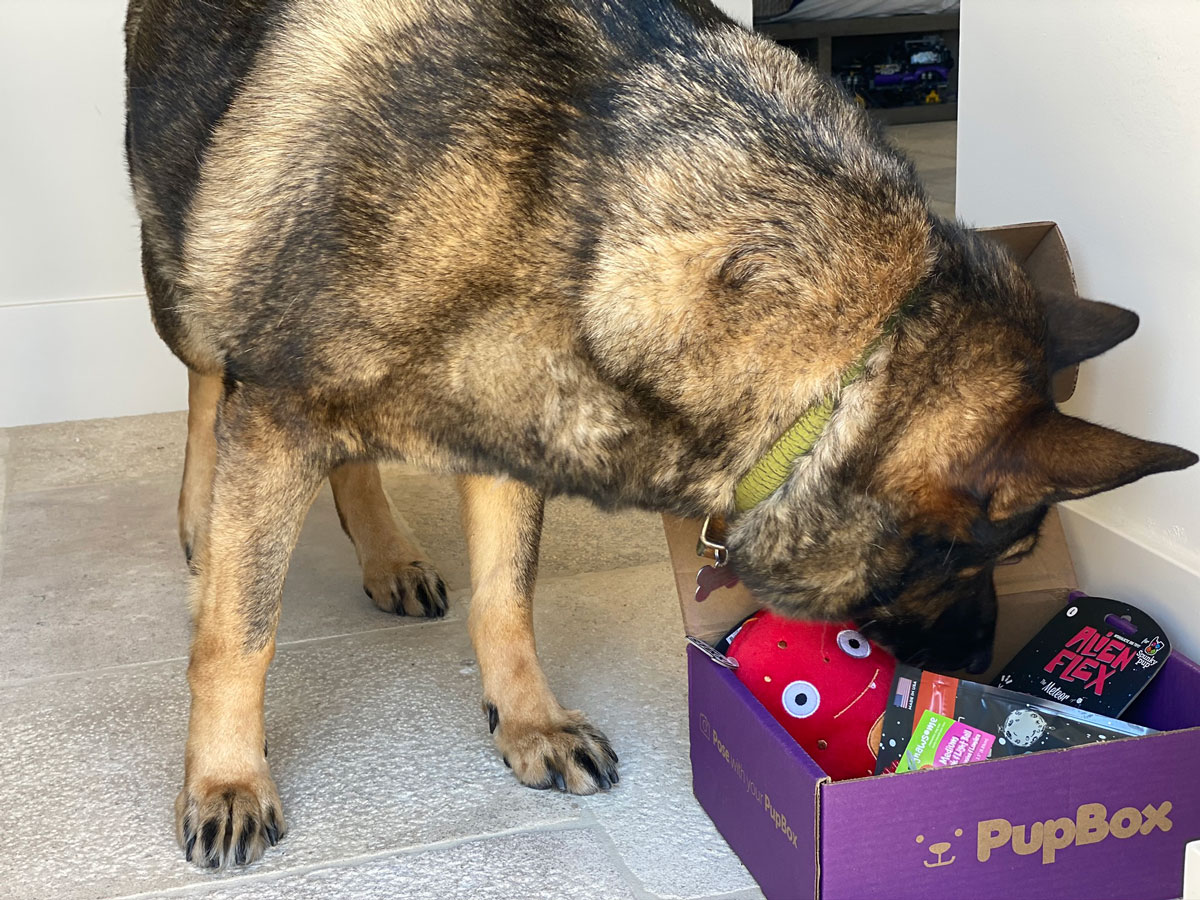 It’s lighting and squeaking ball, people, so what’s not to love? I see it rolling all over our house, covered in drool and hair, but it entertains her, so I close my eyes to a little bit of mess. 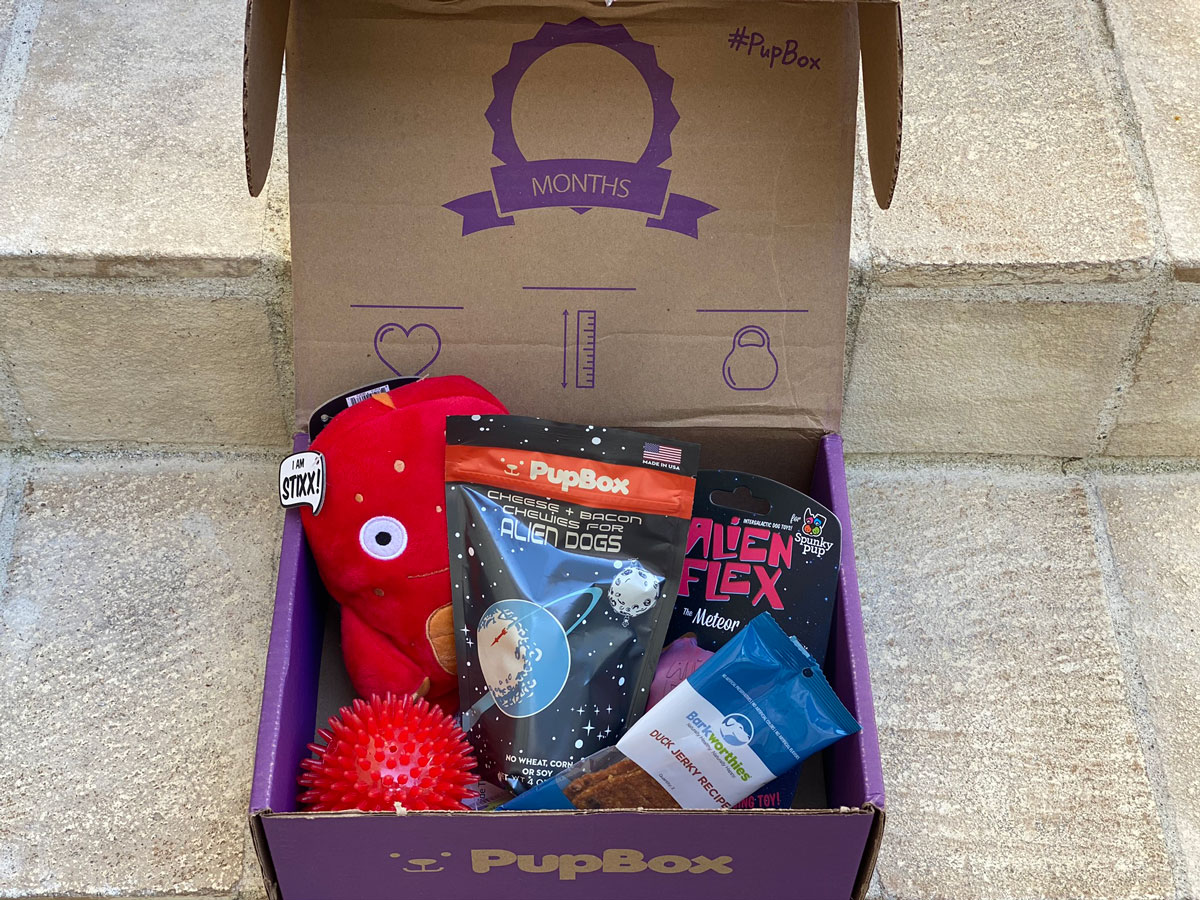 This is pretty much a fancy rolling treat dispenser. Oska enjoys pushing it around and getting rewarded with a few treats falling from it random times. 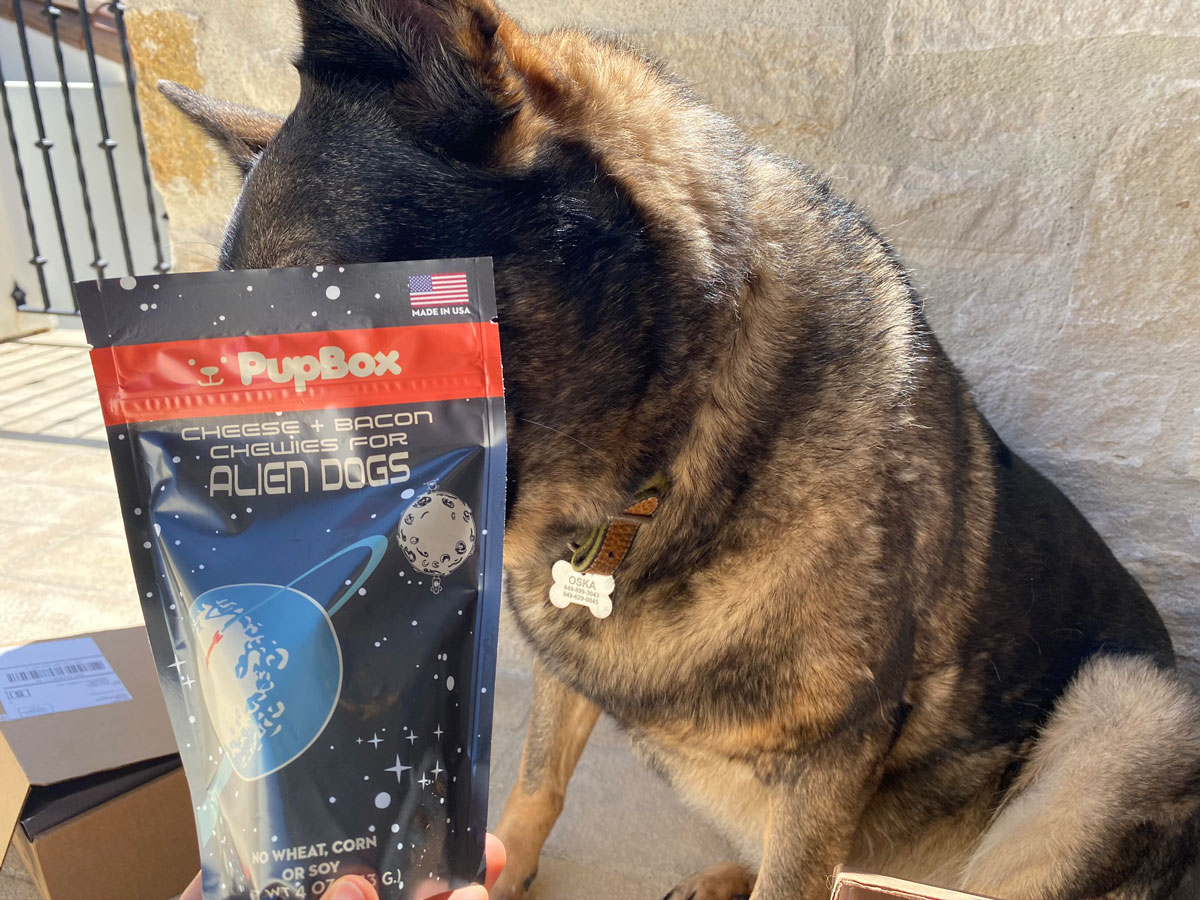 Cheese and bacon can’t be bad, that’s obvious. Don’t we all know that by now after spending countless days at home when bacon and cheese is good for breakfasts and lunches just the same? Oska is human too and does appreciate a scrumptious snack with those two heavenly flavors.

And this is what came in May BarkBox: 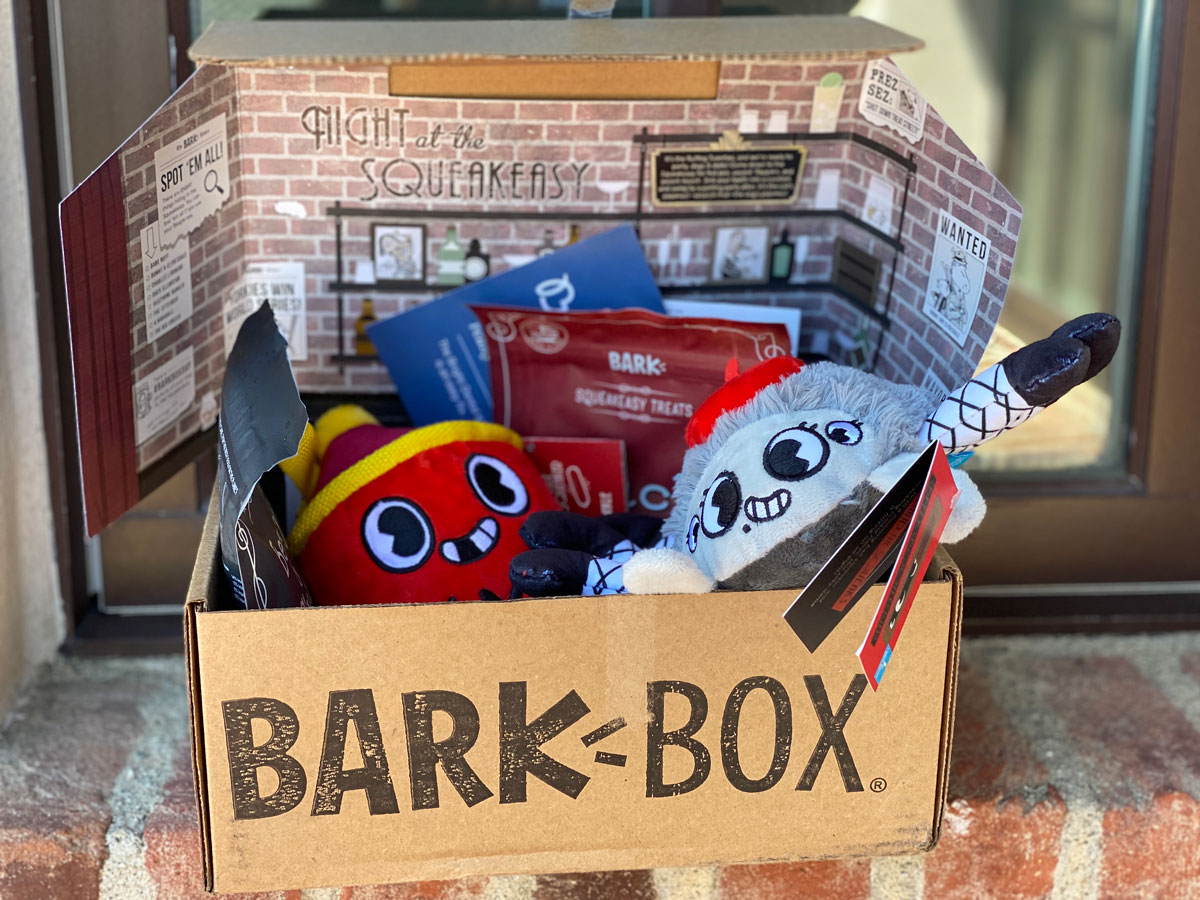 Spider from the roaring twenties 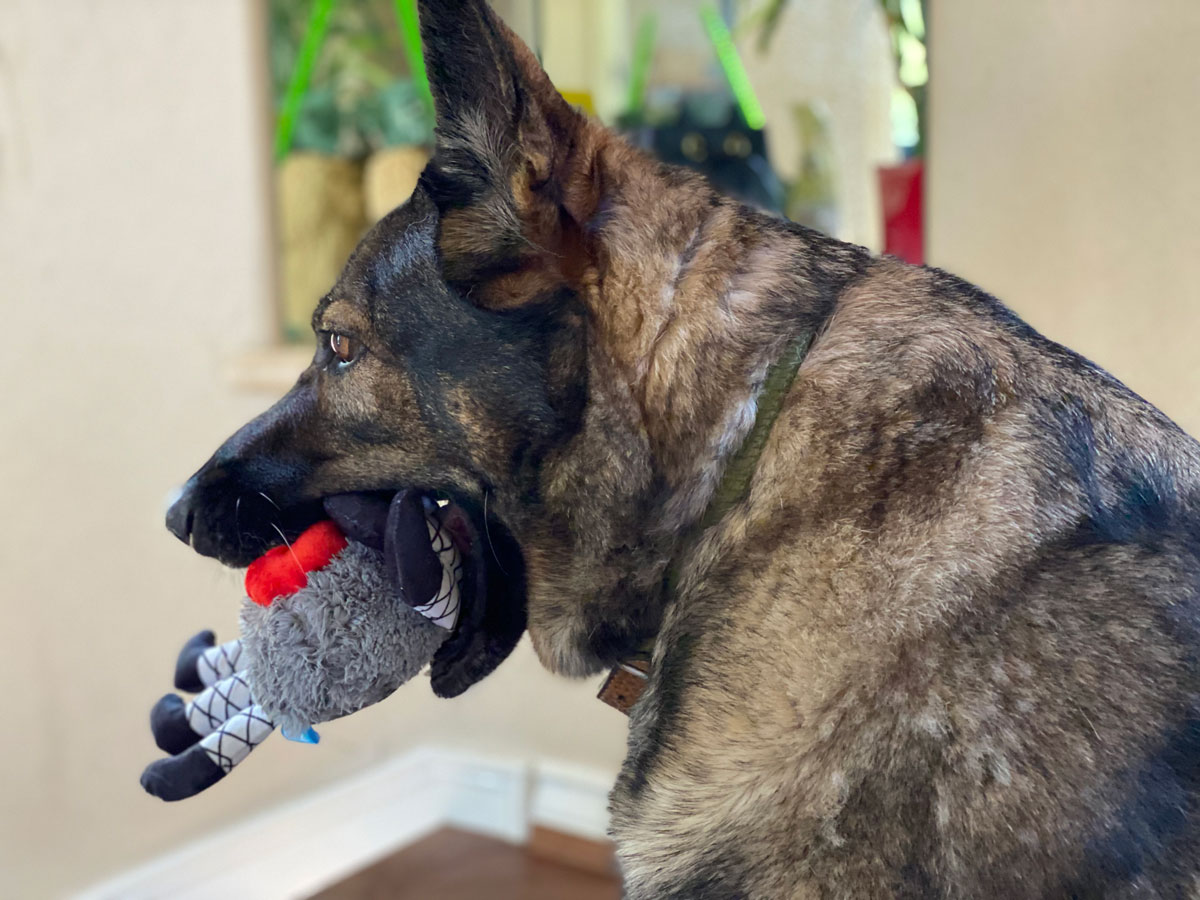 I am in love with this spider! If I had a baby in the house, I would give this toy to the baby. But since my baby now is Oska, I gave it to her with a heavy heart and am ready to watch it get destroyed.

The toy is made for tugging, but it won’t be used for that for long, because handles and small details get chewed off first in this house. The toy is very bright though, which helps finding it after it hides under the sofa. 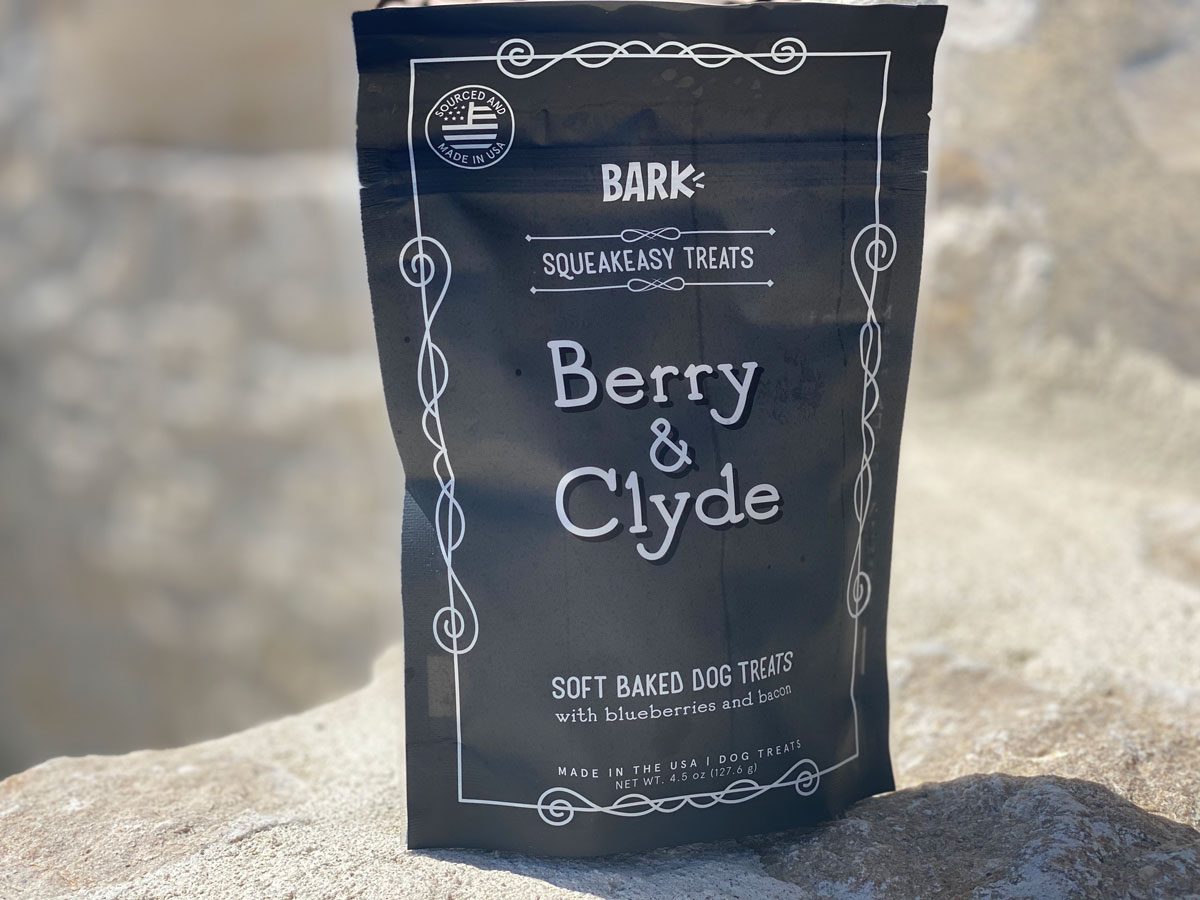 Bacon and blueberries might seem an unusual combination, but Oska enjoyed them very well. They smell good too and offer a bit of crunch between meals.

This duck soup has cranberries and pears, which sounds like a luxurious Christmas kind of dinner. And since it can be Christmas every day on quarantine, this becomes totally appropriate. 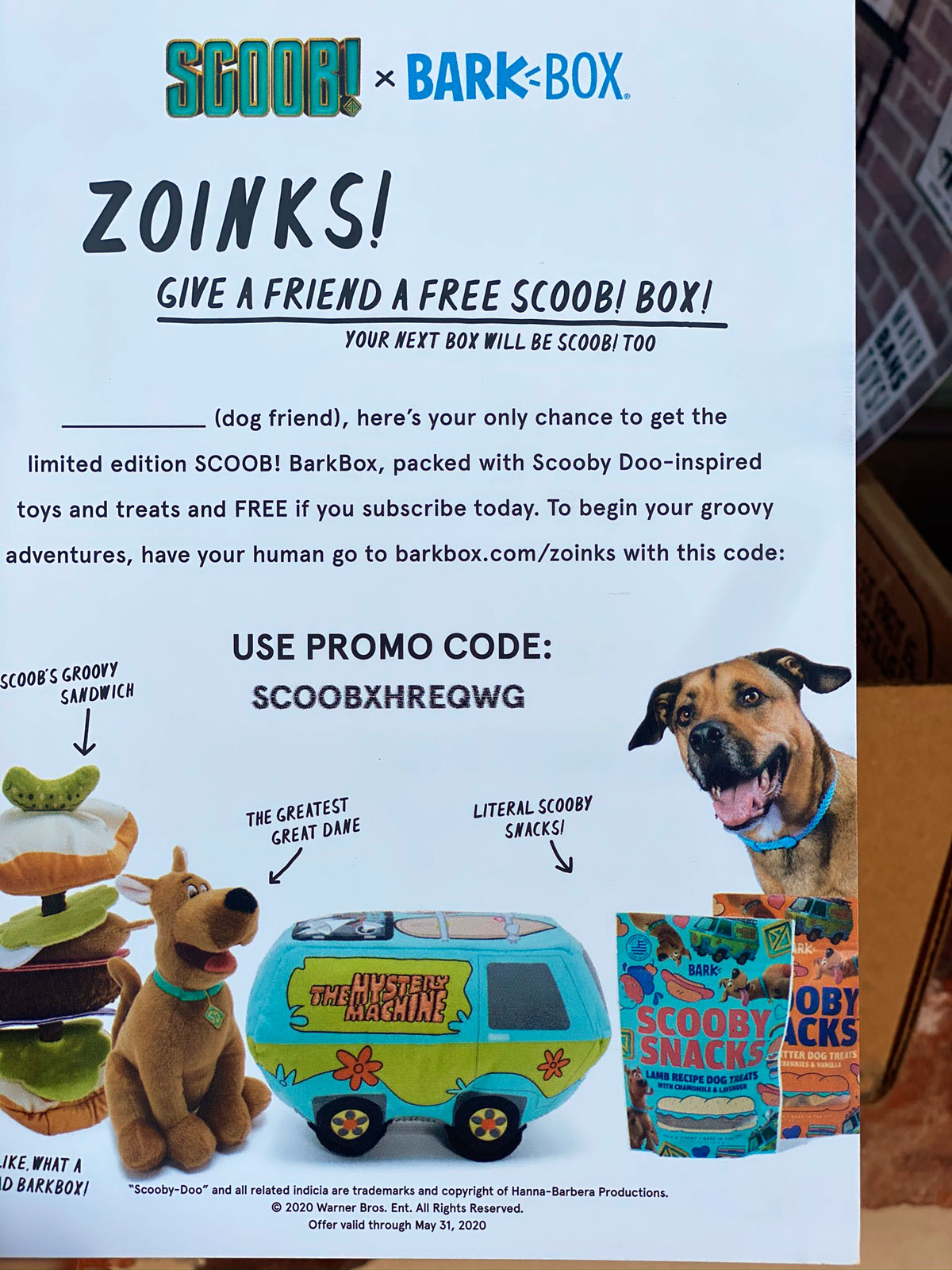 This stick is a peanut buttery perfection and was consumed in under a minute – German shepherd teeth conquer treats like this in a speedy fashion. The stick can be broken in smaller pieces, of course, and used for training rewards. I gave it whole and received some thankful looks for sure. 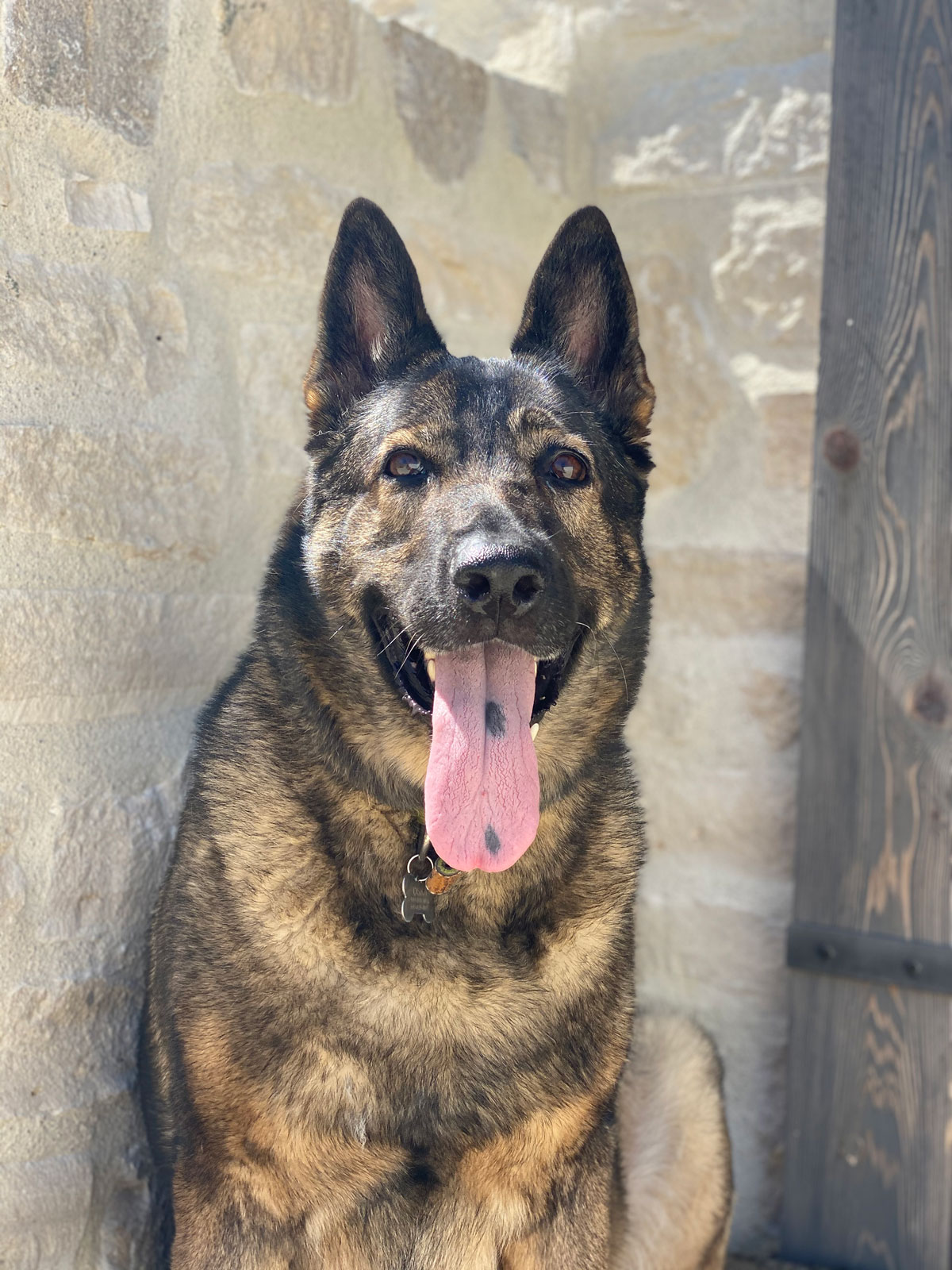