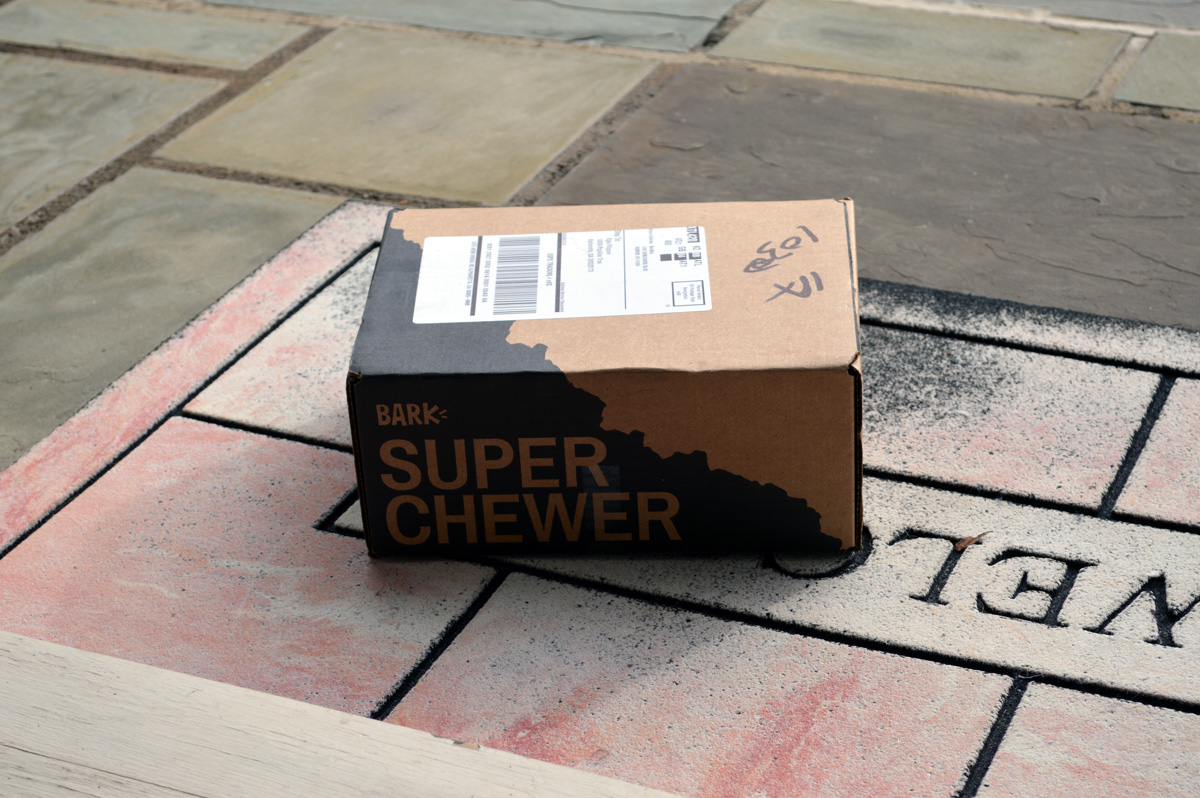 There is totally no reason why dogs shouldn’t join their human friends in Valentine’s Day celebration with gifts. To be honest, I didn’t have anything planned for Marlo, but then our second Super Chewer box showed up at the door today, and we know it’s full of gifts. 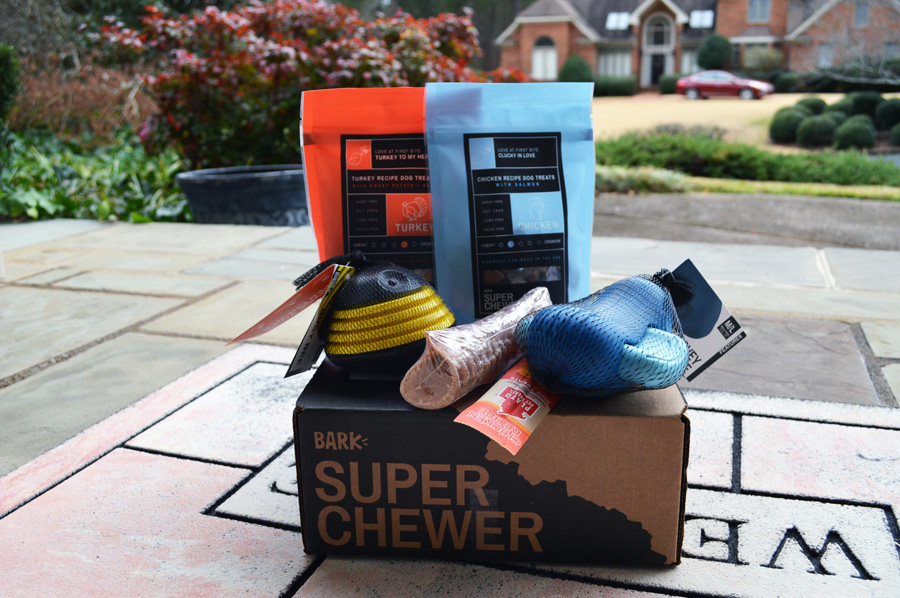 So we’ll have a nice celebration, which we started a day early because his eyes were just begging for something from this nicely smelling box. 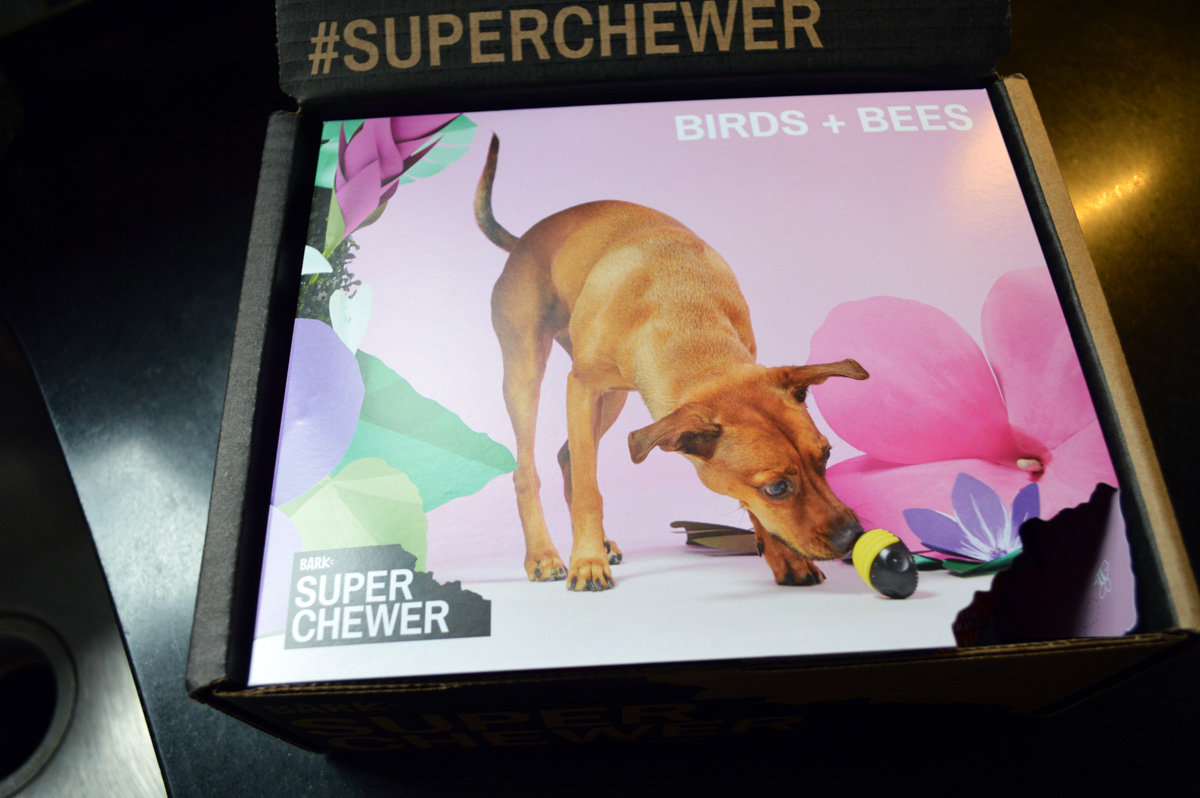 I have been trying different dog subscription boxes for a while now and I swear Marlo knows when a box is for him – he pays no attention to Amazon boxes, but perks up when something comes from BarkBox or Chewy.com. 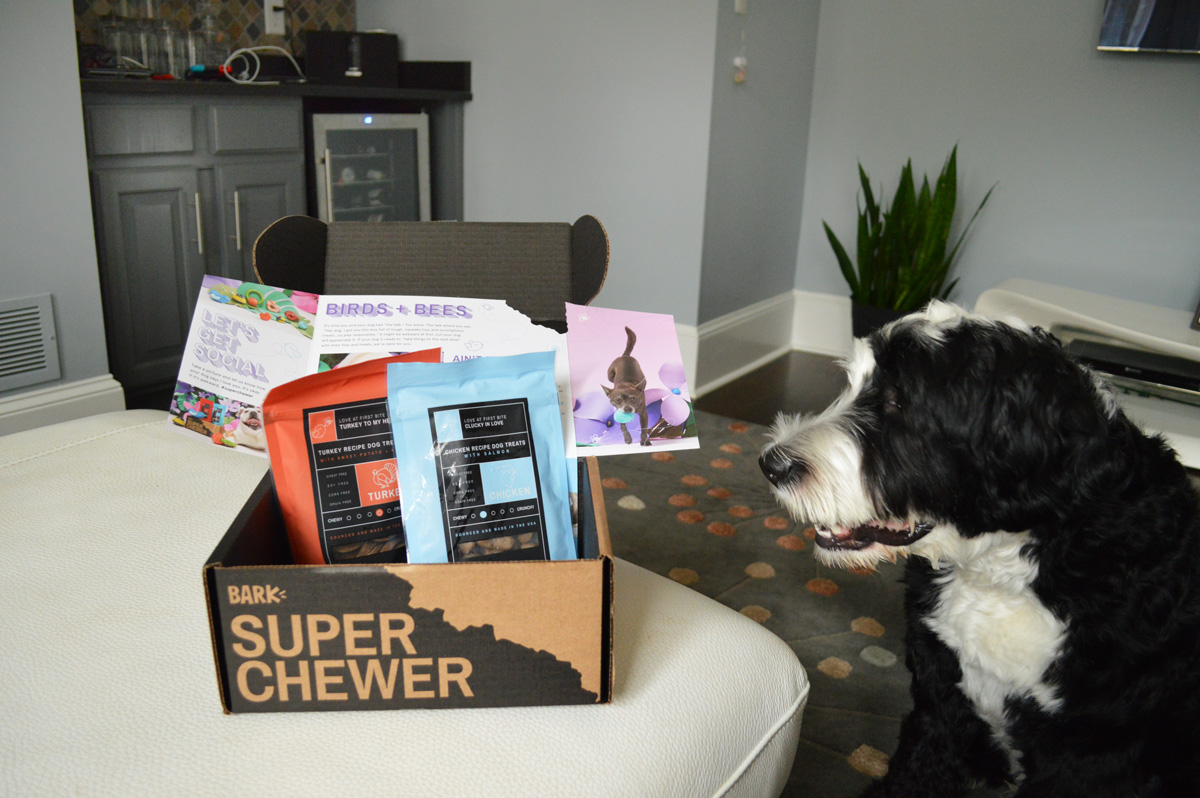 February Super Chewer box is all about love, spring and birds and bees, literally! And I love this theme. Daffodils are beginning to bloom in my yard and although it’s still quite cold, spring can be felt in the air, so the box is very appropriate. 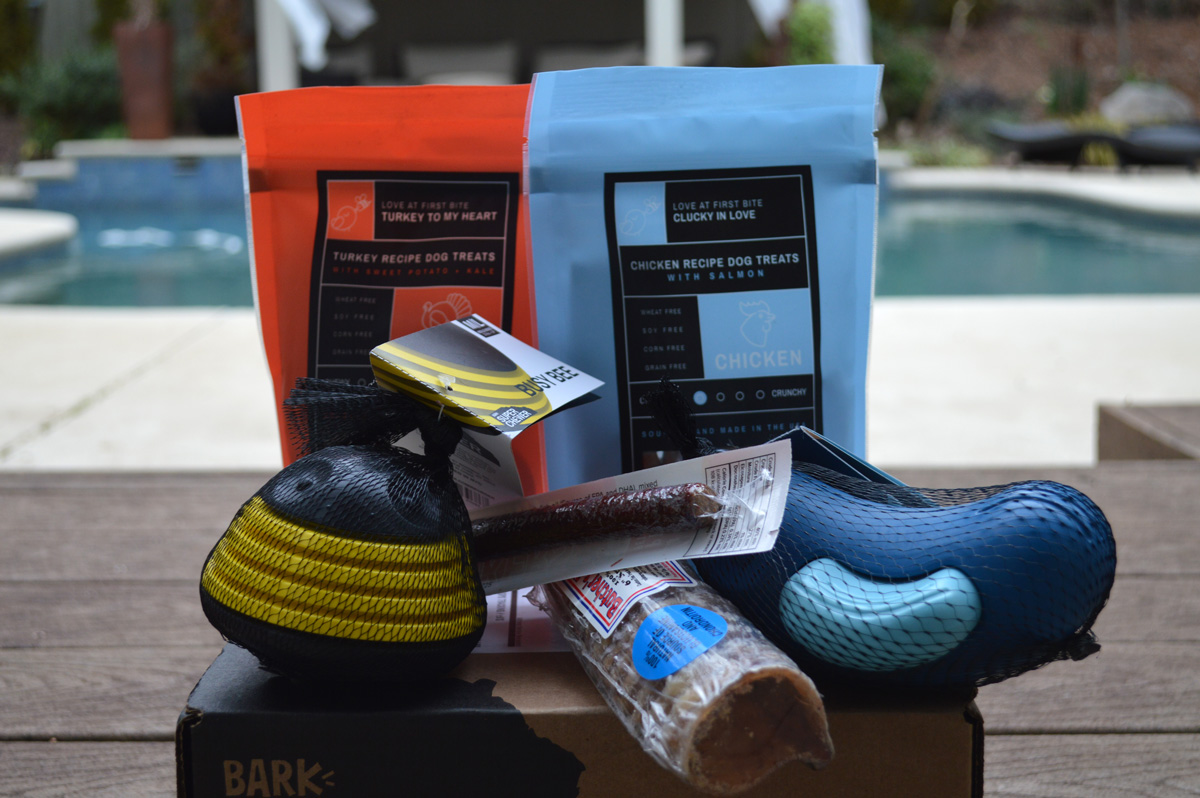 As soon as the box is opened, a cute pink picture of a dog sniffing a rubber bee emerges and sets the mood. There are a couple of things in the box smelling so good that Marlo planted himself by it and drooled while I was trying to take some pictures before letting him dig in. So I say this box, just like the previous one, passed the scent test. 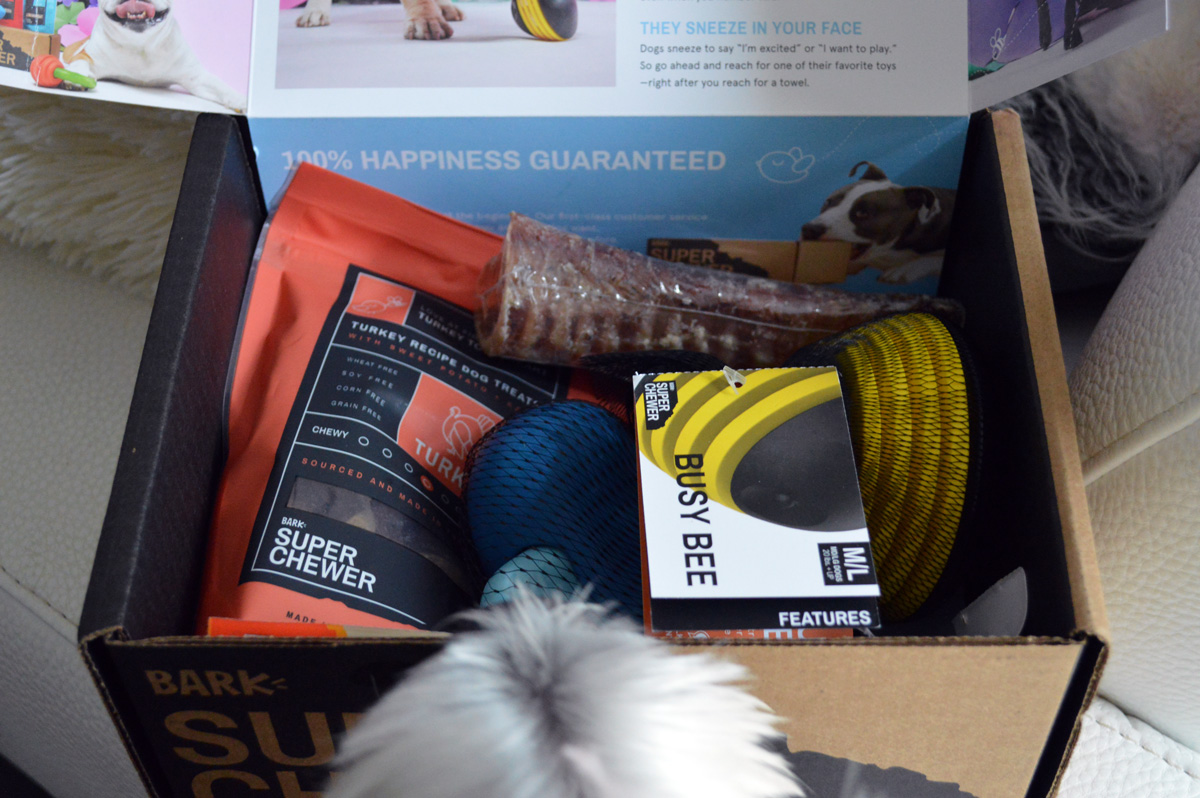 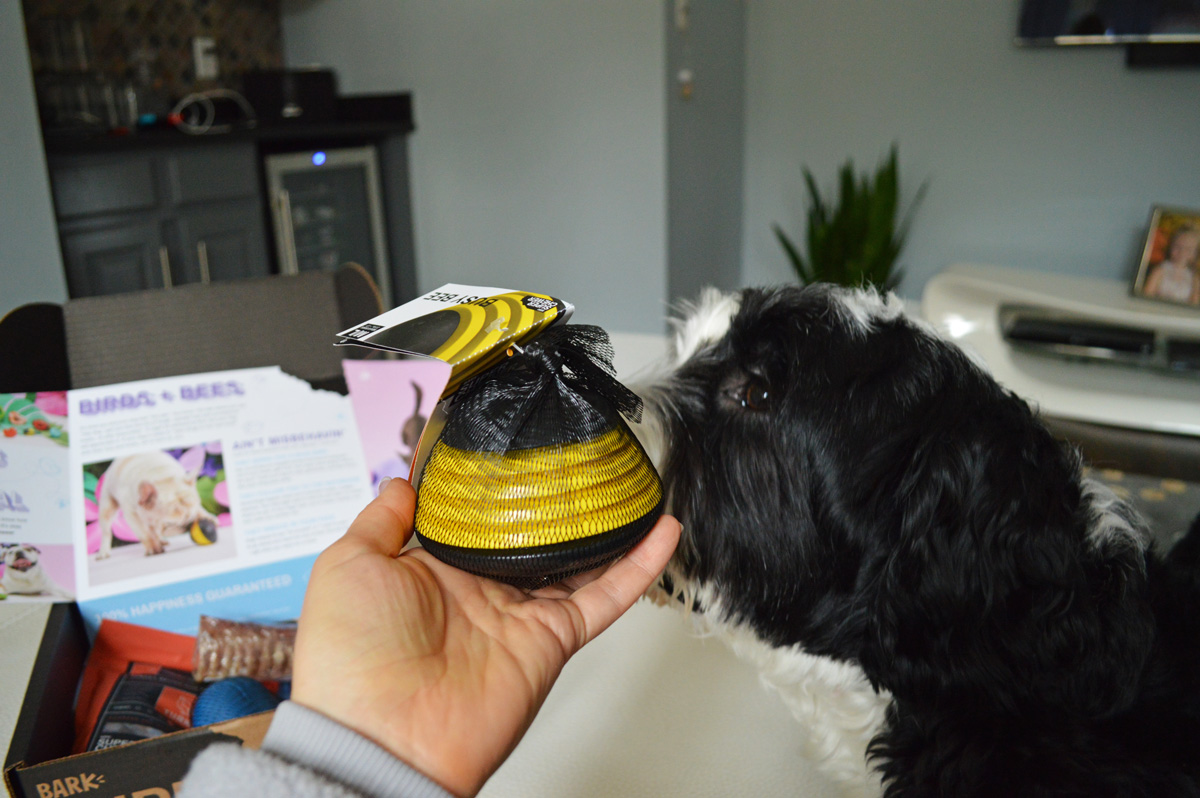 Inside there were two extra tough rubber toys – the bee and the blue bird. The bee is made of natural rubber, has a squeaker inside, and is honey scented. Marlo probably would have loved something meat scented, but the nice feeling rubber is good enough for his chewing cravings. This is the one toy I gave him today – saving others for tomorrow, February 14th. The blue bird feels very heavy, the body is made of natural rubber, wings of solid nylon, and the whole thing is vanilla scented. I think it will last him for days, if not weeks. 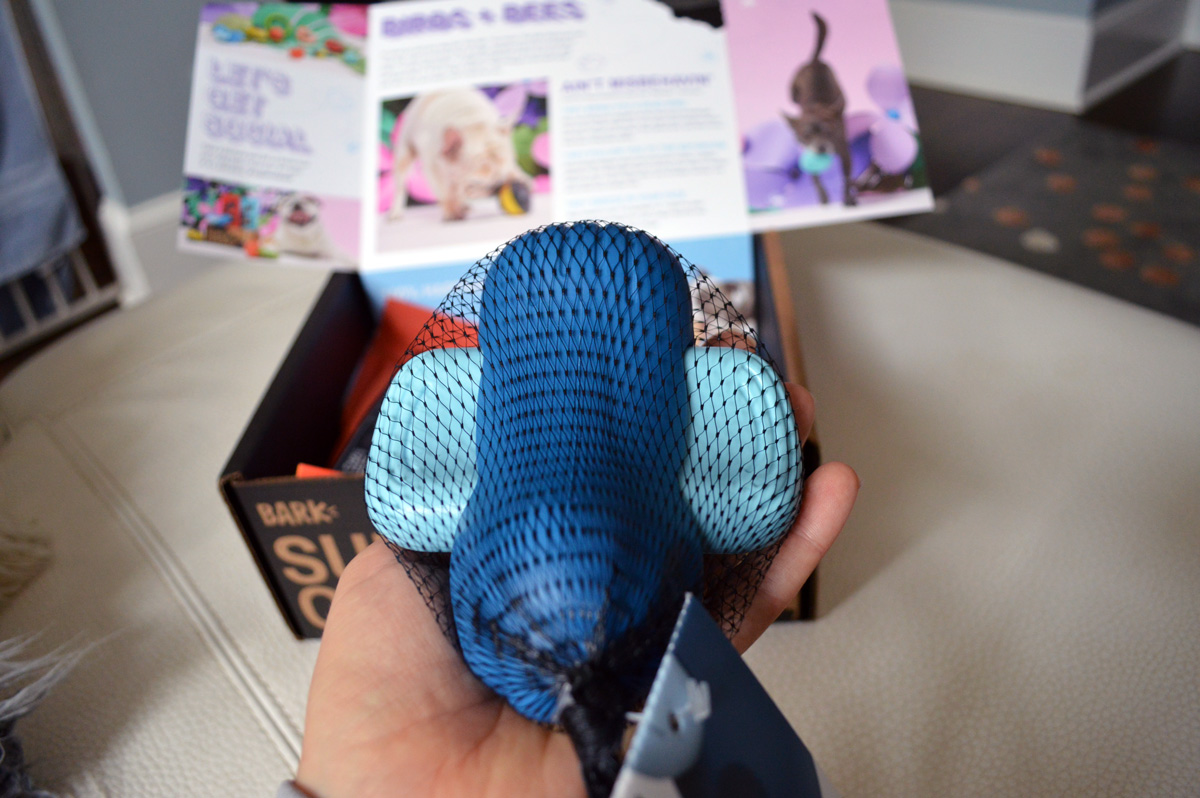 The biggest draws for Marlo from this box are two tasty treats. One is Butcker’s Block Bones “6 Krunchie Tube. I am not sure what it really is, but it looks tasty and claims to be a good natural source of glucosamine and chondroitin. Next treat is Plato Dog Treats Chicken Recipe Thinkers Real Stick. 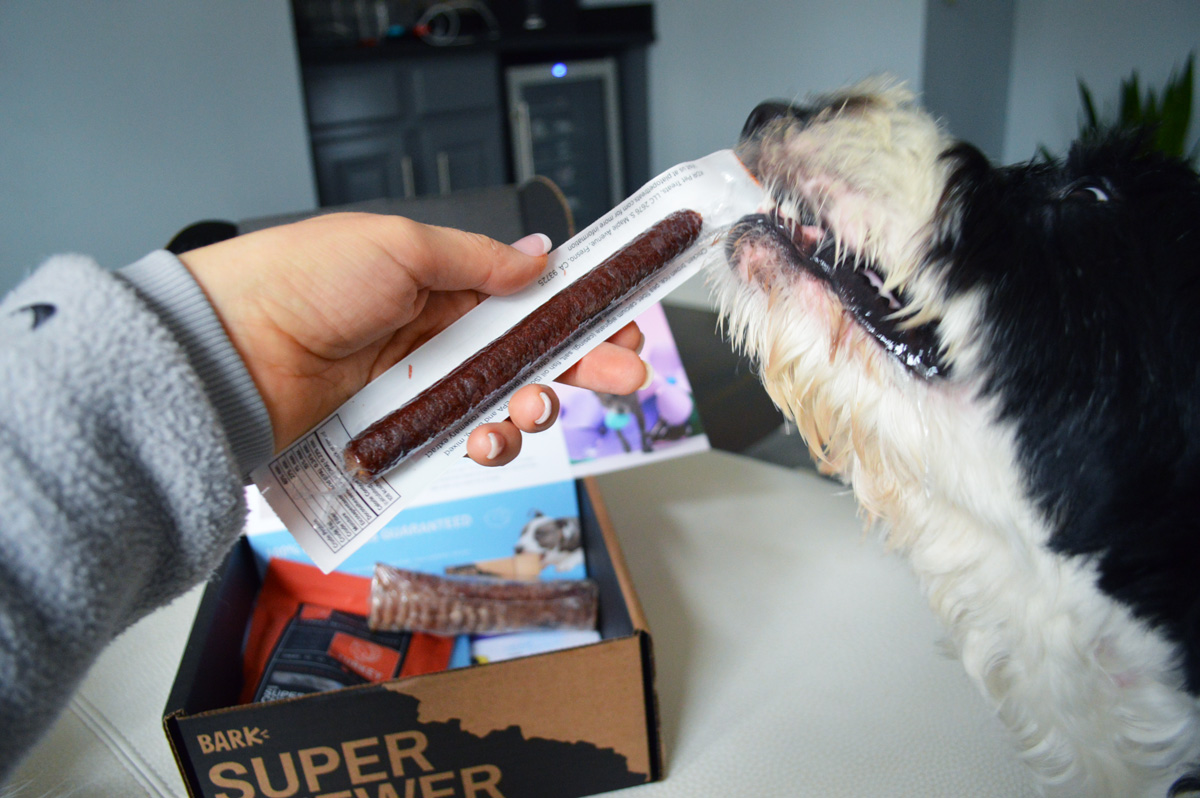 It looks like a small sausage and I am sure it smells like one too since Marlo tried to chew it through its plastic cover. 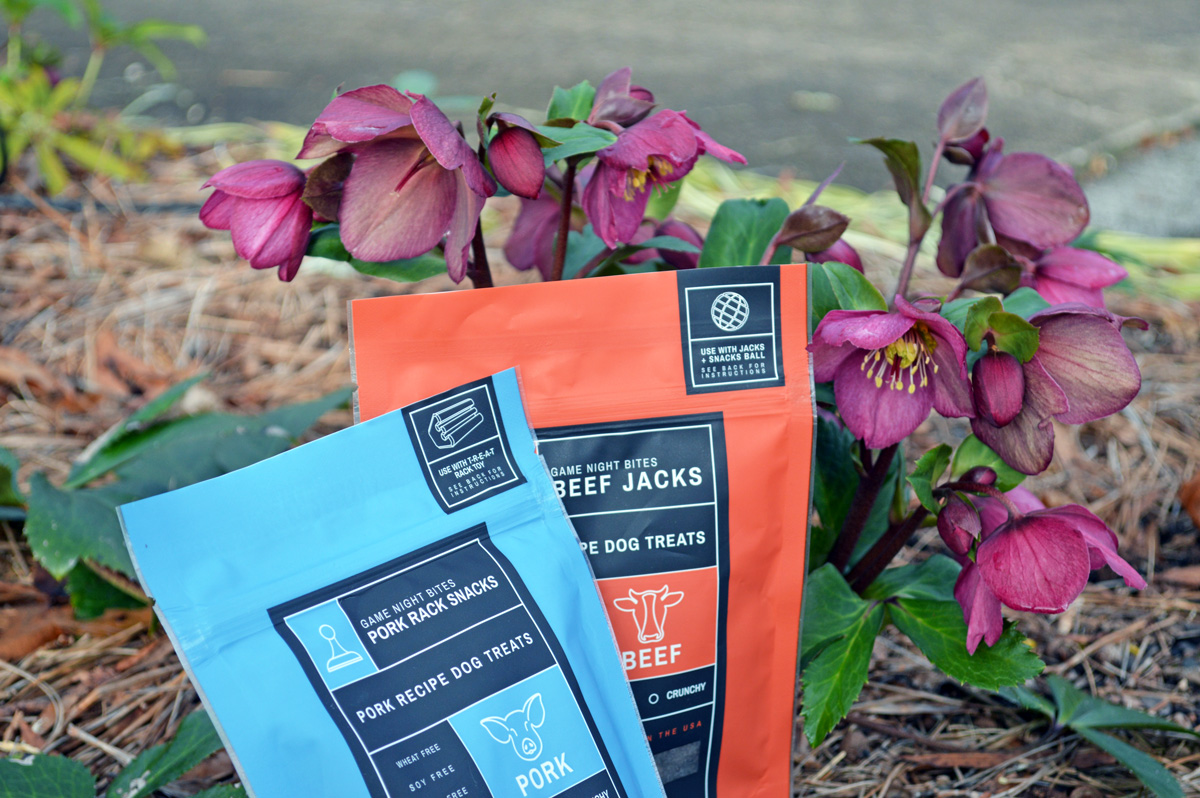 The final two things in the box were two bags of treats. Lucky At First Bite Clucky In Love chicken recipe with salmon and Love At First Bite Turkey To My Heart turkey recipe with sweet potato and kale. The treats are undeniably tasty, and made with no wheat, soy, corn, or grain. 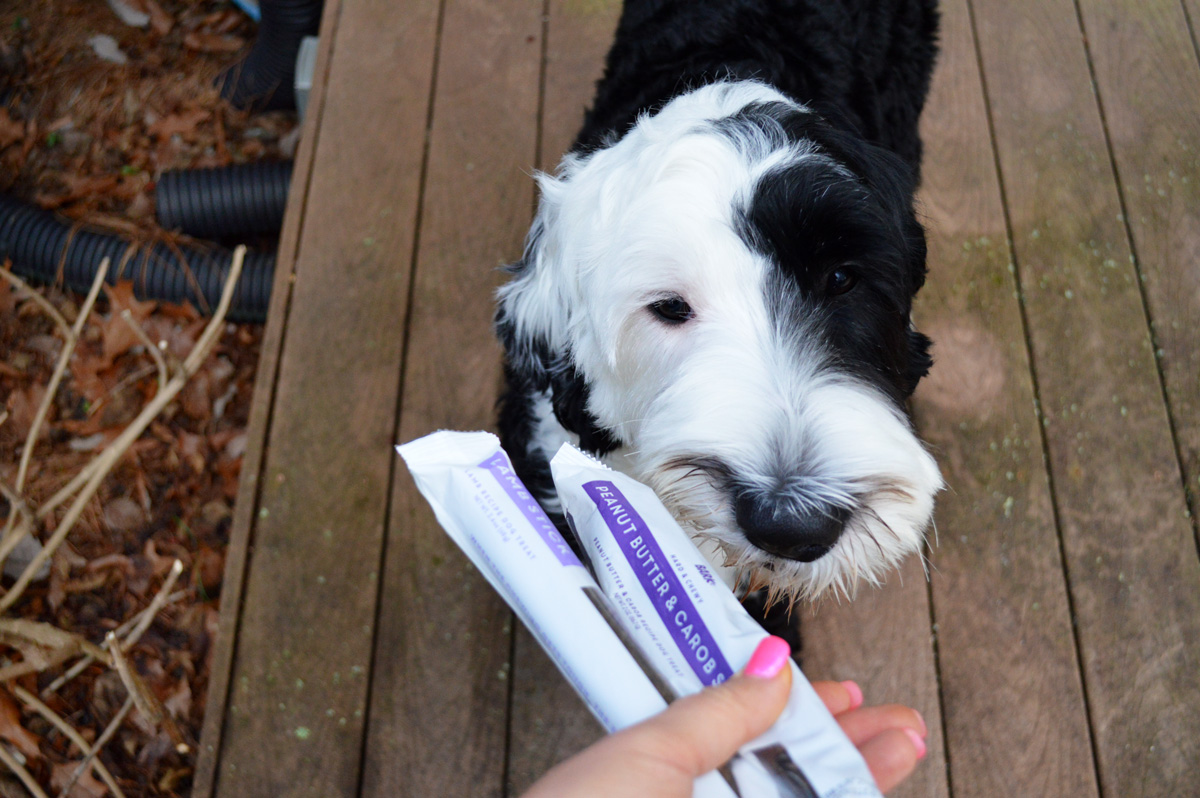 Finally, the box also had a little envelope with three invitations for other pups to try Super Chewer or regular Bark Box for free. I think I have seen one such coupon in the previous box, but definitely not three. This must be because of Valentine’s Day. And it does make a perfect gift. Marlo sent one coupon to his friend Mila, the labradoodle that belongs to my gym friend. Mila is going to get her treat box ordered for her right away and that makes me happy! 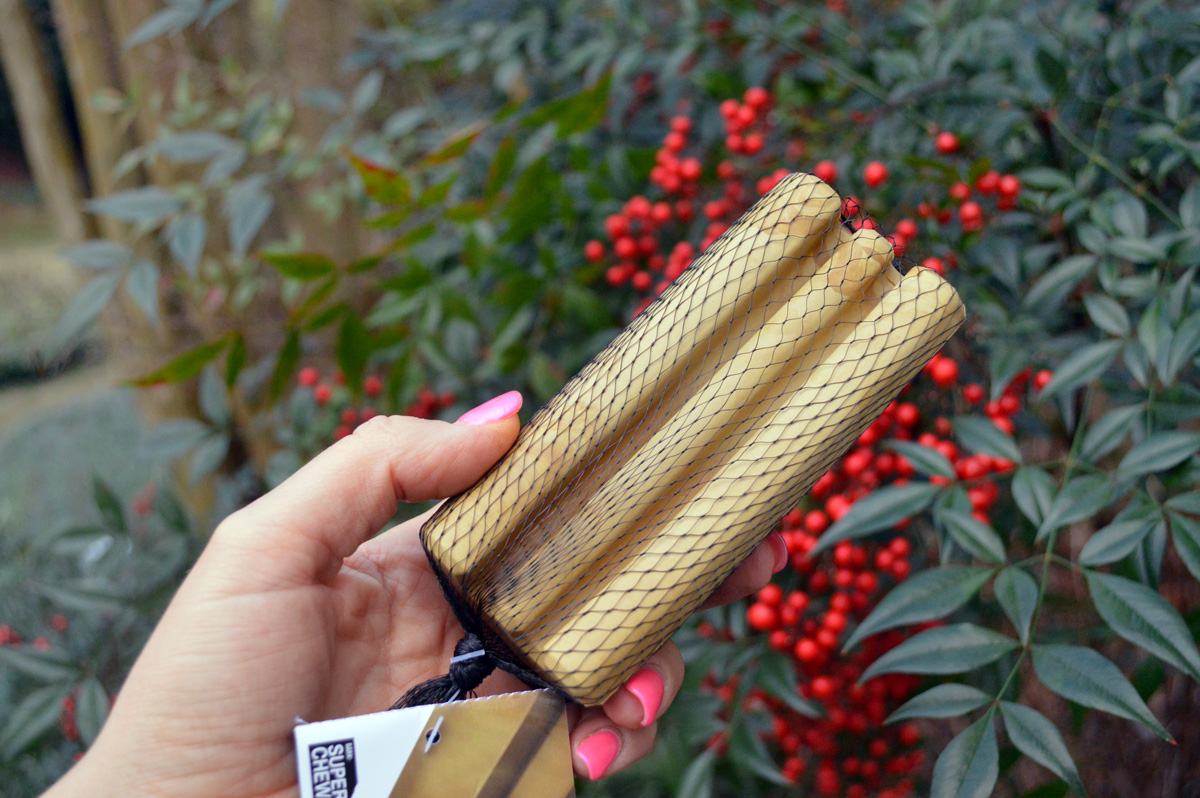 Super Chewer invites all the dogs to get their picture taken and sent to the company by tagging it #superchewer as a part of their social campaign. I think it’s a very cute idea and will probably snap one of Marlo while he works on his bees and birds basking in the sunshine by the pool. 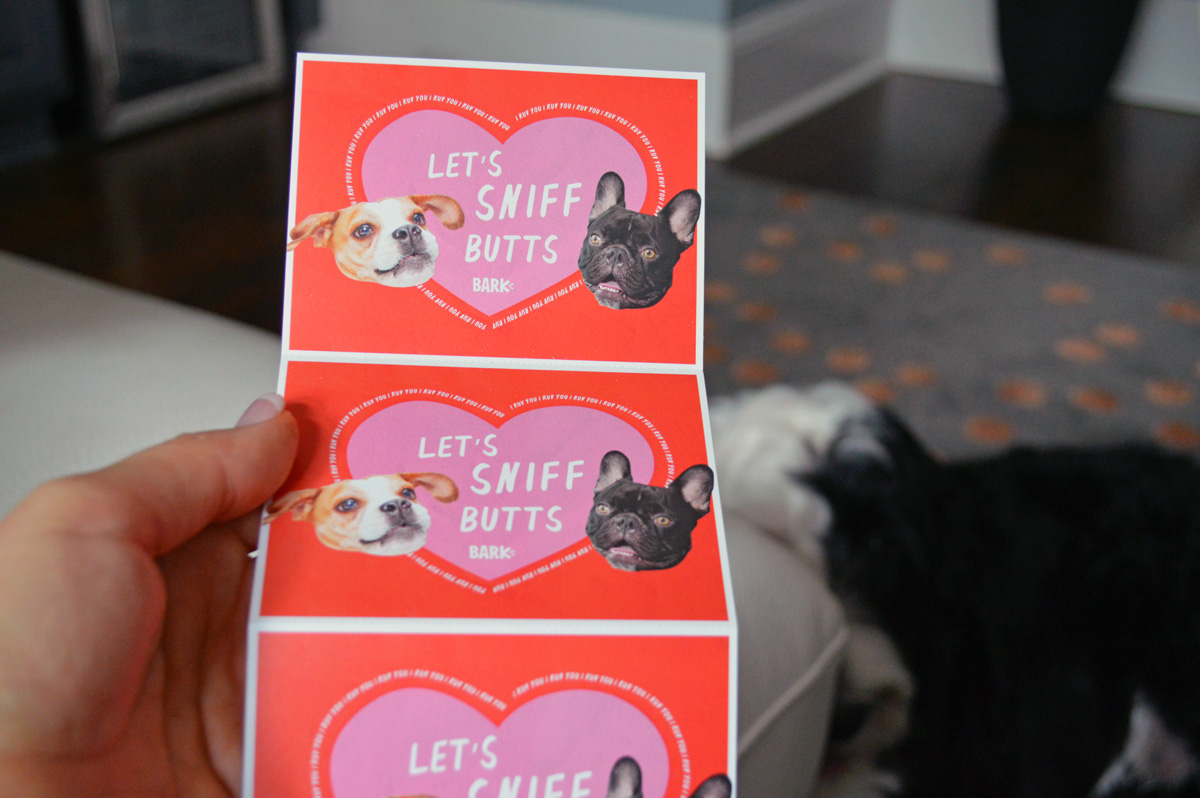 If I had to compare this box with January’s, I wouldn’t know which one stands out more. January’s box had a very cute snow white snowman to put the treats in, but I wanted it to remain cute and clean for longer, so didn’t really let Marlo enjoy it. This box contains tough rubber toys that won’t get ruined or dirty right away, so I think they are more usable. The edible treats and chews are equally good in both boxes.

I have to admit that I continue to be impressed by the quality and value of Super Chewer boxes and planning on being a customer for a long time. After all, Marlo is only a year old, so he has a long way to go before he loses interest in chew toys and treats. 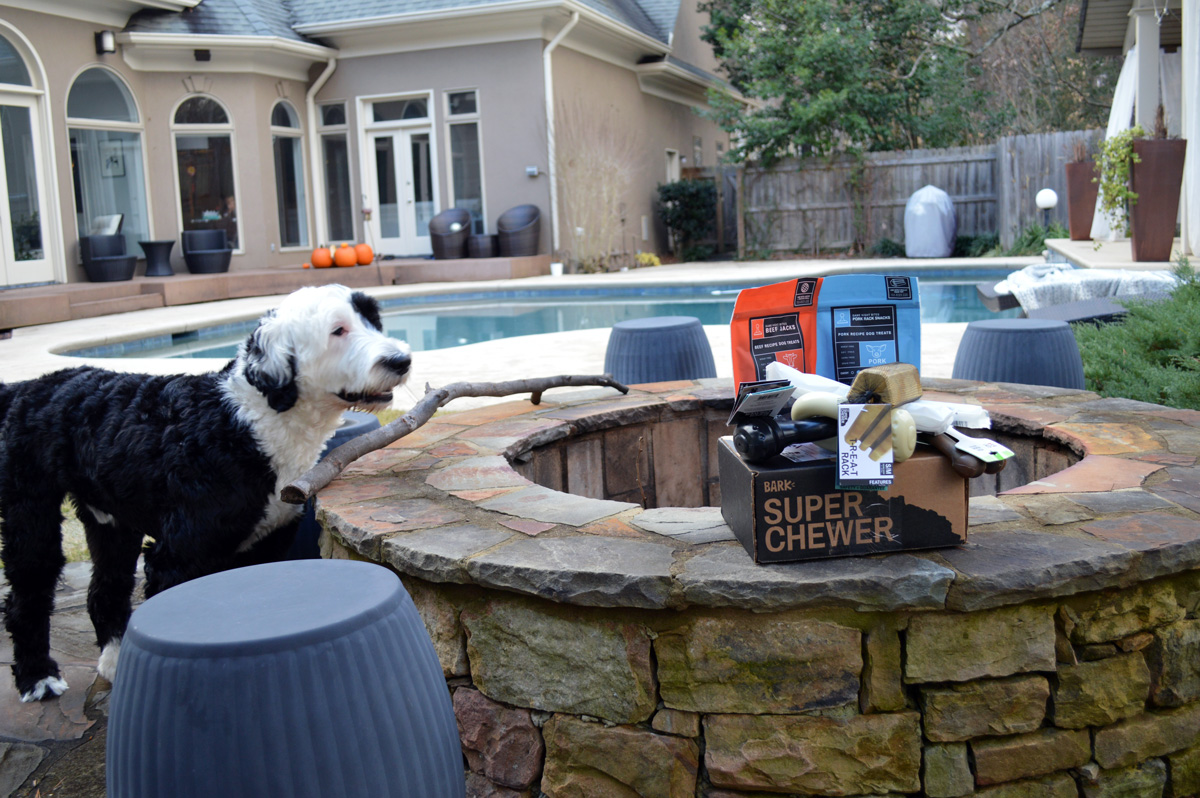